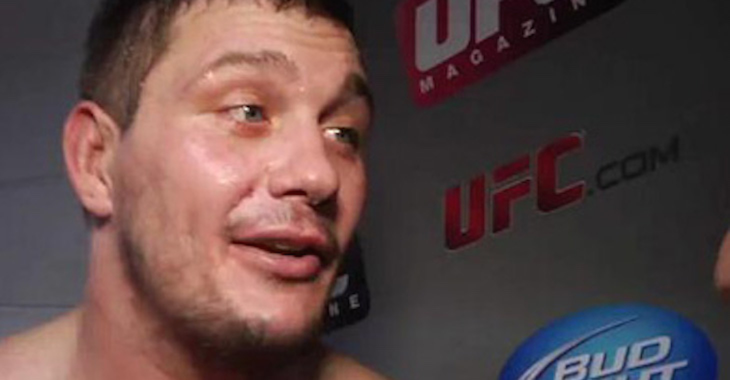 Matt Mitrione’s ‘UFC Fight Night: Boston’ scrap with Travis Browne was the last fight on his current UFC contract. Unfortunately for Mitrione, two eye pokes and a broken orbital lead to him being defeated via TKO at the event.

While Mitrione is appealing the loss with the Massachusetts commission due to the fact that referee Gary Foreman didn’t deduct a point from Browne for poking Mitrione in the eyes twice. In addition, after the bout several suspicious details emerged regarding Gary Foreman’s actions leading up to the bout.

With a “very nice” offer from Bellator MMA on the table, Mitrione is waiting to see if the UFC will match the contract offer.

Mitrione spoke on The MMA Hour:

“UFC has the right to match. Definitely, I’ve got a very nice offer from Bellator. I’m very happy with that. I’ve been in talks with ONE [Championship]. I feel I am very happy with where things are with Bellator right now.

“As a matter of fact,” he continued, “I actually sent in today the official offer sheet from Bellator into the UFC to see if they want to match.”

“I’d be happy with the offer from Bellator, but I feel that I have unfinished business in UFC,” he said. “If the UFC matched, my first fight would be with Travis again. That’s my money fight. I want that fight. I was beating him, I’m better than him, the world knows it, the world saw it, especially if they’re calling fouls where he can’t stop my forward aggression coming forwards. Travis is going to have a really bad night and he knows it, too. The world knows it.”