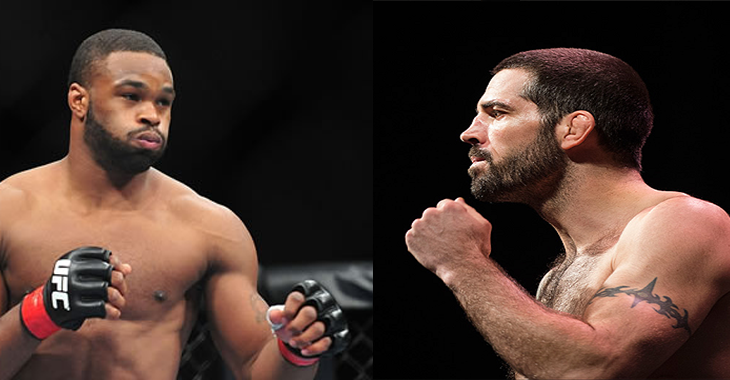 Matt Brown is not happy that Tyron Woodley is getting a title shot against Robbie Lawler at UFC 201.

The UFC veteran spoke with MMA Underground on his displeasure for the UFC’s decision to give Woodley a shot at UFC gold.

“[Tyron] Woodley, he’s a bitch. I just don’t like him anyway,” said Brown (transcribed by MMA Fighting). I’d fight him in the f**king street for free.”

Brown and Woodley have had their fair share of beef on twitter, and Brown had an interesting take on how they differ.

“Then he’s always on Twitter just talking and he told me to keep my name out of his mouth when he’s the one talking to me. He’s just not the personality that I like. He’s not a warrior, he’s not a soldier. If we were on the battlefields in the 1200’s, in the Medieval, the Dark Ages, this motherf*cker would be back hiding in the bushes while guys like me, I’d be on the fucking front lines with a sword in my hand. He’d be over in the f*cking bushes throwing tomatoes and shit or something. So he’s not my kind of person.”

While Brown says that the only person he has to worry about is himself, he does give his prediction for the welterweight title fight.

“He’s getting the title shot. I can’t complain about that. I worry about myself. I ain’t worried about what he’s doing but I think Lawler’s gonna knock him out pretty good.”

What are your thoughts on the welterweight title fight? Share your prediction on the outcome of the fight with us in the comment section.