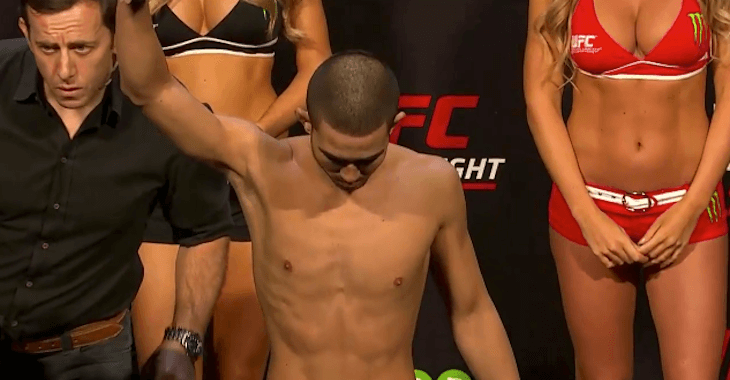 Pettis’ head coach, Duke Roufus, broke the news via Instagram, revealing that ‘The Phenom’ had suffered a minor injury in training that would prevent him from fighting on Saturday. In addition, Roufus went on to call the injury a “speed bump”, claiming the injury wouldn’t take long to heal.

Pettis’ scheduled opponent for the event, Louis Smolka, wasn’t too happy about Pettis’ withdrawal. He followed up Pettis’ announcement with a video, in which he mocked Pettis for his “hurt vagina”. In the video, Smolka also told Pettis that he had got him a present, a box of tampons, which he then proceeded to autograph for the younger Pettis brother.

Smolka, an active Reddit user, posted his video on the MMA section of Reddit. Except things didn’t go the way he planned. Rather than people bashing Pettis, they began to bash Smolka for the video:

– Funny you talk about vaginas with all that pubic hair on your face.

– You’re a beast Smolka, but good god, do UFC fighters have any insults that aren’t, “haha, you’re a woman, you have a vagina!”?

– My 12 year old self thinks this is hilarious.

– What an insufferable, classless statement.
Also, grow a real beard or shave.

– Hi Luis, impressive fight against Ben Nguyen! A few questions though:
Why do you consider having a vagina and having periods to be an insult?
Do you consider yourself superior to the women in the UFC because you don’t have a vagina?
How upset are you that over a dozen women have headlined UFC cards — something that you have never done — despite having vaginas?
Do you think that furthering the damaging attitude of sexism that is deeply ingrained in both the sport of MMA and our culture in general is worth having more people know who you are?

– I see someone got you with the ol’ gorilla mask!

– It would have sounded funnier if he didnt have the voice of a fucking 15 year old. Paige vanzant has a deeper voice than this dude

– Dude I’m gonna go ahead and lay it out for you. This is a super cornball move and not humorous in the least. Forget anything about sexism. It’s just straight up juvenille and weak telling another guy he has a vagina and being serious about it. Unless you’re in middle school. Then it’s pretty baller.
You also have that really douchey Hawaiian way of going about it. Which makes it infinitely worse. That slow, effeminate BJ Penn drawl you speak with. is enough to drive a dude insane.

– I had never heard about you until right now. And now I don’t like you. I don’t think making this video was a good idea.

So far there has been no word yet on whether or not the UFC will pull Smolka from the card as well, or seek a replacement opponent for the Hawaiian. Stay tuned for updates as they become available.