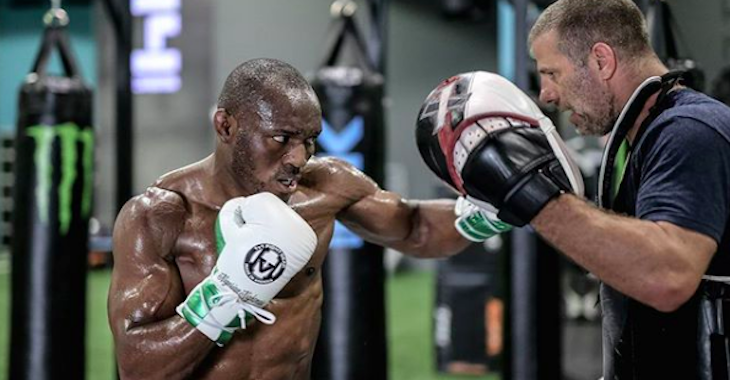 Over the last few days, several rumors have surfaced suggesting that rising UFC welterweight contenders Kamaru Usman and Mike Perry might soon collide in the cage. On Monday’s edition of The MMA Hour, however, Usman assured that there’s nothing in the works with Perry, and that he’s instead keen on a fight with former lightweight champion Rafael dos Anjos.

Kamaru Usman’s issues with Anjos stem from the Brazilian’s rapid rise through the welterweight rankings – something he does not feel is justified.

“You bring in RDA after taking two [losses] at lightweight,” he said of dos Anjos’ welterweight career. “He moves up, he fights [Tarec] Saffiedine who I think was ranked 14th while I was ranked I think 10th at the time. You bring in [Saffiedine]. who’s ranked below me, and [dos Anjos] goes to a decision with that guy – it was not even an exciting fight, it was a close fight. He goes to a decision, then the rankings come out and RDA’s ahead of me? What sense does that make? Then he fights Neil Magny, who I’ve been calling out for a long time, [but he] just seemed to find a way to duck me. He fights Neil Magny, and finishes Neil Magny in four minutes, I believe. I just killed a guy (Sergio Moraes) who also finished Neil Magny faster than [dos Anjos] did, in the first round. Like what sense does it make for him to be number-five in the world when I’ve literally ran through every guy I’ve faced in that division?” Usman continued, explaining that he believes a fight with dos Anjos needs to happen. It was then that he admitted that, if he doesn’t get his desired scrap with dos Anjos, he’d be willing to fight Mike Perry.

“If RDA is number five in the world, let him prove it,” Usman said. “I Tweeted him, I said ‘December 2nd, Detroit, RDA let’s do it.’ I got nothing back. It was like crickets. I got absolutely nothing back. The fans have been going crazy with it. That’s a fight that absolutely needs to happen. He’s not booked, so I don’t see why the UFC won’t make that fight. But if for some reason he decides that he’s on vacation somewhere, and he doesn’t want to fight until I’m booked for a fight, then it makes no sense for me to fight anybody else, except somebody that the fans actually care about, like Mike Perry. Because I know Mike Perry won’t duck me.”

Would you rather see Kamaru Usman fight Mike Perry or Rafael dos Anjos?