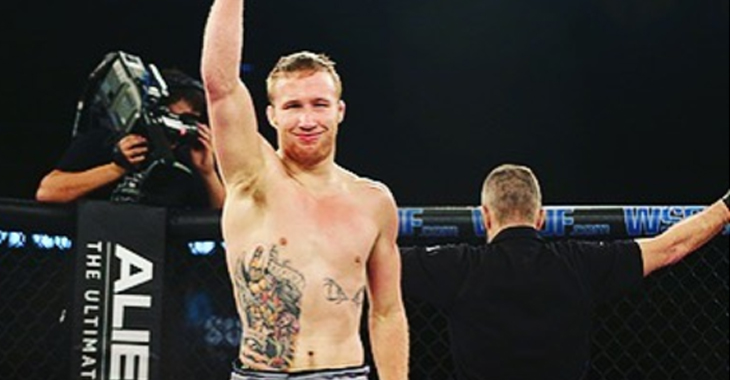 Even with a loss, Justin Gaethje has had an incredible year. He walked away from his five-time defended WSOF lightweight title to finally sign on with the UFC, much to the rallying cries of fans and the blessing of the violence gods. He put on MMA Fighting’s ‘Fight of the Year’ with Michael Johnson, then had another ‘Fight of the Year’ candidate with Eddie Alvarez at UFC 218. For now, he’s going to let the body and brain rest, but he’s already contemplating who he wants to fight next. Who better than Kevin Lee, the last fighter to lose to interim lightweight champ Tony Ferguson?

“First time I ever met [Kevin Lee], he was nice. Then he talked sh-t saying I was fan-boying over him. He doesn’t know what respect is. I’ll never show him respect again, that’s for sure. I just like punching loudmouths in the face. I’m sure I’ll get the itch [to fight again] sooner rather than later. I said I wanted to wait around until June, July, but I’m sure I’ll get the itch sooner. It’s too soon [right now], but we’ll see how things play out. I might want to beat up Kevin Lee, that kid over there I want to beat up.” — Justin Gaethje speaking today on The MMA Hour.

Started wrestling at 4. I’ve lost before and I will lose again. It is the nature of the beast. I love what I do and the people I do it with. Thank you for all the love and support. On to the next one. pic.twitter.com/0w0UkPcEnR

It could be a garbage man or CM Punk, anyone would pay to watch Justin Gaethje fight no matter who it would be against. However, Kevin Lee was on a great stretch of five wins before losing to Ferguson. It’d be a perfect oppurtunity for both of them to jump right back up to the top of the rankings. That is, if Kevin Lee is down. It looks like he’s trying to push for a fight with Khabib Nurmagomedov since Dana White said Conor McGregor is next for Tony Ferguson.

I can’t wait till I get my hands on Khabib.