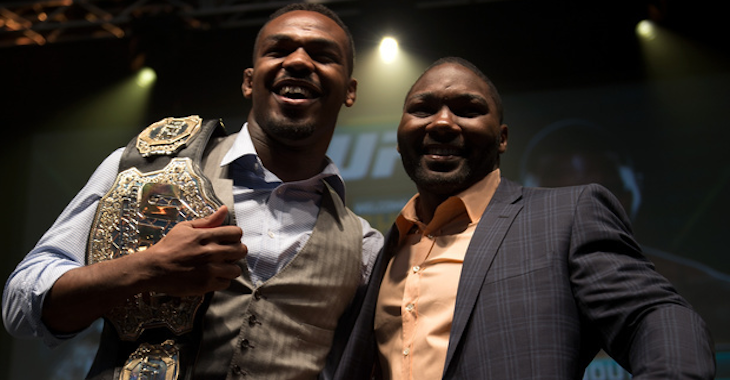 This Jon Jones news hit like a meteor late last night in the midst of all the build-up for Conor McGregor boxing Floyd Mayweather. Everyone dropped everything to react. Fans logged onto Twitter to shed their tears, kick Jones while he was down, or debate what happens next. Right alongside the fans, were the UFC fighters themselves and their reactions were just as diverse. One guy who has been quiet until now, was recently retired Anthony Johnson. He went from contemplating a return to finally get his shot at Jon Jones, to writing a statement on his official Facebook in support (kind of) of the UFC light heavyweight champion.

I've been getting asked left and right about Jon Jones situation.
Well I'll say this…
I learned from my… https://t.co/ETcOIFx6ln

I’ve been getting asked left and right about Jon Jones situation.
Well I’ll say this…
I learned from my mistakes when UFC cut me the first time.
I can’t speak on if he’ll ever learn but as far as fight results, steroids will make you bigger, faster, stronger but not your IQ…
Jon cheated but his fight IQ was still sharp!
He set D.C. up for that head kick by doing the low kicks and liver kicks.
Think about that for a second… This might be a slightly controversial statement, but one that rings true. No matter what Jon Jones did, even his due process ends up proving he knowingly violated USADA’s anti-doping policy and starts a domino effect of consequences, it doesn’t change what he’s accomplished or take away his uncanny talent. It doesn’t, however, change how disappointed fight fans will be that the potential GOAT may never fight again. Now, the long journey of waiting for Jones starts over again.