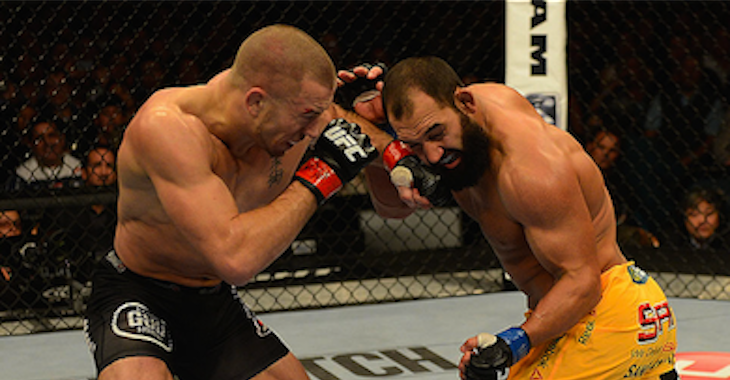 The last time former UFC welterweight kingpin Georges St-Pierre was in the Octagon, ‘Rush’ was defending his welterweight title for the 9th time as he faced streaking contender Johny Hendricks.

St-Pierre ultimately won the fight via split decision, retaining the belt and moving one step closer to the record of 10 title defenses set by middleweight kingpin Anderson Silva. With that being said, many believed Hendricks won the fight. This of course led to talks of a potential rematch, however with St-Pierre’s hiatus from the Octagon, a rematch was never a realistic possibility. Now, with St-Pierre set to return to the Octagon in 2017 at middleweight, and Hendricks currently coming off a win at 185 pounds, many have wondered if fight fans could see St-Pierre vs. Hendricks II four years later. GSP spoke on UFC Unfiltered about the situation, saying:

“I believe the best Johny Hendricks I’ve seen is gone,” St-Pierre told the “UFC Unfiltered” podcast with Jim Norton and Matt Serra. “When he fought Jon Fitch, Martin Kampmann, Carlos Condit – when he fought me – I think this Johny Hendricks is gone. I didn’t feel the same pop, the same explosiveness. Maybe he’s going to prove [me] wrong at 185 maybe, but I feel he’s not the same anymore.”

“We’ll see what’s going to happen with him,” St-Pierre said. “Maybe if he bounces back like before. I believe he has the tools to go back to title contention for 185.”

As St-Pierre points out, Hendricks went on quite the skid at 170 pounds, missing weight and being unable to make weight several times before then ultimately being forced to go to 185 pounds by UFC President Dana White, where he made his successful middleweight debut earlier this year when he defeated Hector Lombard via unanimous decision.