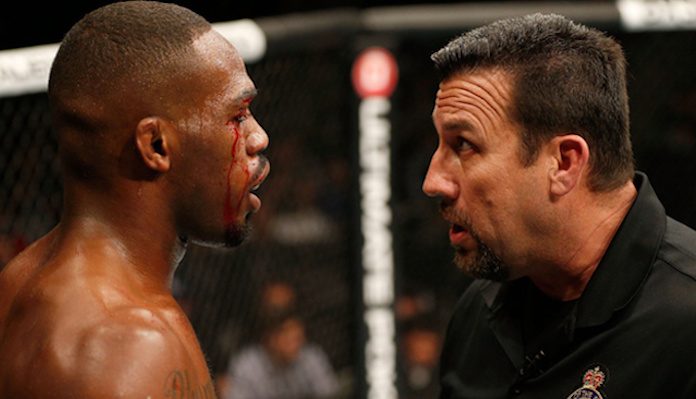 Veteran MMA referee and current Bellator commentator “Big” John McCarthy is becoming one of the most respected voices in MMA. As such, his opinions on the sport’s hot-button issues are always interesting to hear.

On a recent episode of MMAJunkie Radio, the veteran referee tackled the issue of former UFC light heavyweight champion Jon Jones’s unfortunate brush with USADA. In McCarthy’s opinion, Jones probably didn’t intentionally take a performance enhancing drug, but might be a little careless when it comes to what he puts in his body.

“When you’re an athlete making the amount of money that Jon is making, you can’t go to the AM-PM and buy something that’s in pill form and put that in your mouth without going, ‘What the (expletive) are you doing?’ C’mon, dude,” McCarthy said. “You are a frickin’ Ferrari. You can’t do those things. You have got to be smart. And I just don’t see the letting him off with, ‘Oh, it was just a mistake,’ because he’s had that mistake before.”

“I love Jon Jones,” McCarthy continued later. “I say he’s the greatest MMA fighter I’ve ever seen. But this is where the problem comes forward. I don’t personally believe Jon took some type of steroid before fighting Daniel Cormier… But Jon is personally responsible as a professional athlete under contract with the UFC… with everything he puts in his body. And I believe that Jon is taking – or allowing things that are not known or not tested – and because some other trace element is in there that makes you pop, you’re responsible for it.”

“When he took the lie-detector test, I believe that Jon didn’t knowingly take a pill or take a shot or injection for that steroid, but I do believe he’s taking things, or allowing himself to ingest things that, for whatever reason, that sometimes contain these things, because he’s taking them from places that there is no quality assurance.”

What do you think of John McCarthy’s take on the Jon Jones situation?