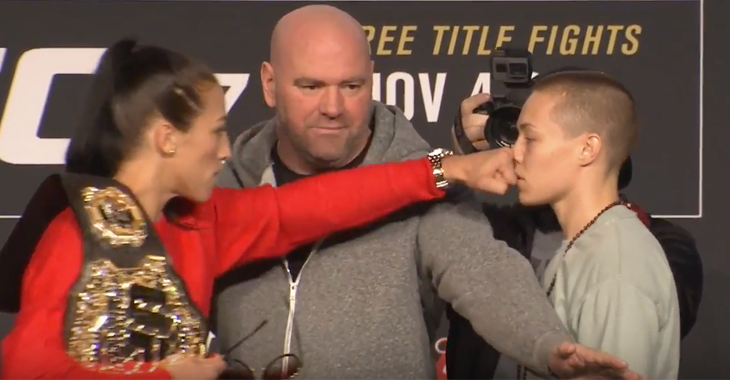 The combat sports universe moves at the speed of light, but even with the infinite treadmill of social media and face-punch dates being booked, it’s hard to forget Rose Namajunas dethroning UFC strawweight champion Joanna Jedrzejczyk at UFC 217. The unexpected result was juxtaposed by the former champ’s signature pre-fight scare tactics. …But they didn’t work. Now Jedrzejczyk seeks to take back what’s hers and is righting wrongs along the way.

“That night I was not one hundred percent competitor for [Rose Namajunas]. […] I am sure that there will be no negligence before the return from Namajunas. After what happened in November, my eyes and ears are open even wider. I am even more demanding not only to myself, but also to my colleagues, to people, who are creating my team. And at the same time I trust them very much. My ties with coaches Katel Kubis and Mike Brown, ties with sparring partners, as well as with the owner of ATT, have tightened considerably.”

LET’S GO 🏆 Titles are on the line as the UFC heads to Brooklyn.

“In the last fight I didn’t show the best of myself and I did not want to delay anything. I know what the problem was coming in to the November fight which affected the result. I want to correct this as soon as possible and win back the championship title. Now I weigh only [two pounds] more than during fight week. I believe that there will be no problem with the weight cut preparation, and before the fight I will feel 100% ready both physically and psychologically.” — Joanna Jedrzejczyk speaking to Onet Sport.

It was revealed after her loss to Rose Namajunas that Jedrzejczyk cut an enormous amount of weight the night before the weigh-ins. Now, according to the former champ she is only a few pounds off from where she needs to be. No matter what happens, Joanna Jedrzejczyk is making sure there are no excuses this time on April 7th.