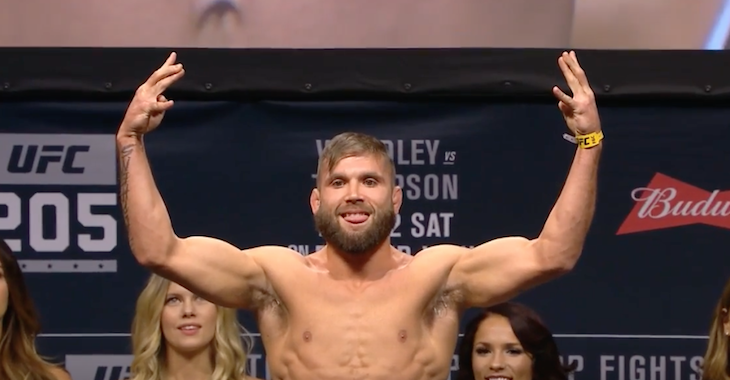 Jeremy Stephens, who currently holds the number five spot in the UFC featherweight rankings, will soon return to the Octagon. He will do so on April 15, when the UFC touches down in Kansas City, Missouri with UFC on Fox 24. Stephens’ opponent will be Brazilian prospect Renato Moicano.

This fight was announced on UFC Tonight on Wednesday evening.

When Stephens steps onto the canvas in Kansas City, he’ll attempt to rebound from a decision loss to former lightweight champ Frankie Edgar, which occurred on the undercard of UFC 205 in November. Prior to this disappointing loss to Edgar, Stephens was riding high on a win over former bantamweight champ Renan Barao. This win, meanwhile, was preceded by a decision loss to interim featherweight champion Max Holloway, and a crushing, flying knee knockout over Dennis Bermudez.

Moicano, meanwhile, will enter this bout with Stephens with a 10-0-1 overall record. His two most recent wins have occurred inside the UFC’s Octagon, where he first defeated Tom Niinimaki by submission, and then, after a long stretch on the shelf, defeated Zubaira Tukhugov by decision back in May. Moicano has won 5 of his 10 bouts by submission, and the other 5 by decision. Stephens is far and away the starkest test of the 27 year old Brazilian’s career.

Other highlights of the UFC’s April 15 trip to Kansas City include a women’s strawweight bout between ranked contenders Rose Namajunas and Michelle Waterson, a flyweight bout between Louis Smolka and Tim Elliot, and the UFC debut of highly regarded French prospect Tom Duquesnoy, who will take on Patrick Williams. At the moment, the main event of this Fox card remains a mystery.

Who do you think comes out on top in this newly announced Jeremy Stephens vs. Renato Moicano bout? Will Stephens return to the win column or will Moicano spring the upset? Sound off, PENN Nation!