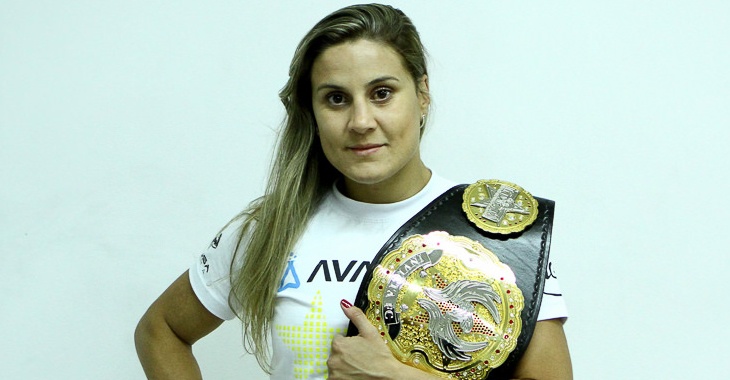 When you bring up the discussion of best female flyweight fighters in the world today, very few if any will say that Invicta FC champion, Jennifer Maia isn’t #1. The Curitiba, Brazil native, Maia has defended her title twice and is currently on a six-fight winning streak that includes wins over Vanessa Porto, Agnieszka Niedzwiedz, and Roxanne Modaferri.

Around the time that the UFC was ready to crown their inaugural 125-pound champion after a season of The Ultimate Fighter, Maia was ready to defend her title the week after. As one might imagine, Maia should have been a part of the tournament to decide the UFC’s first flyweight champion. Instead, Maia turned down the offer to participate on the show and as she told MMAFighting, it was for a pretty understandable reason:

“They invited me to be on The Ultimate Fighter, but since I’m the Invicta champion I thought that I don’t need to go through TUF to be in the UFC. Sometimes you’re not in a good day there and end up losing, and it’s not smart to leave a promotion where I’m the champion to try something.”

After Maia successfully defended her title and a UFC champion was crowned in Nicco Montano, it was time for her to make the jump to the UFC. At least…we assumed so.

The UFC had offered Maia a fight against the recent 135-pound UFC title challenger, Valentina Shevchenko for Shevchenko’s UFC flyweight debut and Maia’s UFC debut. To which Maia initially turned down but is now more ready for than ever:

“I don’t choose opponents.” Maia told MMAFighting, “The moment they offered me this fight, I turned it down because I was coming off a surgery and then a fight, and I needed some time to rest and respect my body. I chose to decline it that time. I would accept to fight her now. We said we would take this fight if we had more time to prepare because I was just coming off a fight. Right now, I don’t choose. Whoever they offer me, I’d say yes. I got back to training a while ago and I don’t choose [opponents]. I’ll fight whoever is in front of me. I think that Valentina will have her post-fight recovery now, but I’d definitely accept to fight her or any other opponent they want.

There’s nothing done yet but we’re waiting for good news to at least sign the contract.”

It would come as a big surprise if Maia’s next fight doesn’t come in the UFC, especially considering that they’re already negotiating. But crazier things have happened.

Who would you like to see one of 125’s best make her UFC debut against?