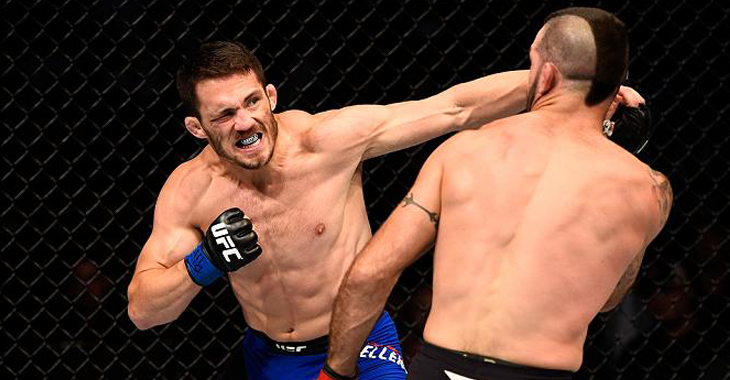 UFC fighters can be startled with some rude awakenings by the U.S. Anti-Doping Agency (USADA).

With USADA’s random drug testing, they can show up during all kinds of odd hours where a fighter isn’t typically expecting any company.

Tim Kennedy, an active, Ranger qualified, Green Beret, Special Forces Sniper who is also a Senior Special Forces Weapons Sergeant had his little incident with a USADA employee who was slowly following him to his house and made a stop outside of his home. Kennedy ended up pulling a gun on the USADA employee and demanded to know who he was. Ends up “he was only there for Tim’s pee.” Ellenberger tweeted on Thursday, “USADA guy wasn’t happy to see a smith & wesson barrel at 545am.”

With USADA’s random times of showing up unexpectedly, you can imagine it being quite startling to have someone banging on your door at such early hours.

Jake Ellenberger is scheduled to fight Jorge Masvidal at UFC The Ultimate Fighter 24 Finale in Las Vegas, Nevada on December 3. Ellenberger is coming off a first round TKO over Matt Brown at UFC 201, which took place in July. “The Juggernaut” will be looking to stack up another win as he was actually briefly cut from the UFC after going 1-5 in his last six fights prior to the fight with Brown. Ellenberger pleaded to UFC President Dana White to give him one more shot to prove he still had it in him to compete with the best in the UFC and did just that.

Who are you picking to win in the fight between Jake Ellenberger and Jorge Masvidal on December 3 at the TUF Finale? Share your pick with us in the comment section!