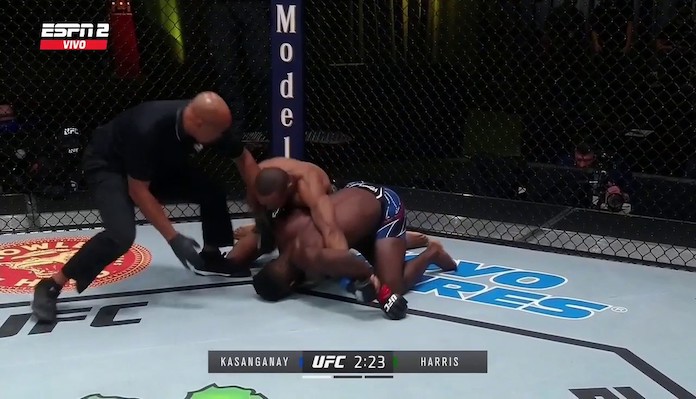 Kasanganay and Harris exchanged big shots during a wild first round of action between the two welterweights, but it was the Guyana native Harris who ended up getting the better of his opponent with the first-round TKO win. For Kasanganay, this loss dropped his UFC record to just 2-2. Coming off of a crazy spinning back kick KO to Joaquin Buckley last year, Kasanganay dropped down to welterweight earlier this year and looked good in his divisional debut as he defeated Sasha Palatnikov by submission. But Harris brought him back to reality with the first-round finish that left his opponent unable to defend himself.

Taking to his social media following the knockout loss, Kasanganay released a statement following his second loss inside the Octagon. Take a look at what Kasanganay wrote below.

“I’ve had some good days I’ve had some hills to climb I’ve had some weary days And some sleepless nights But when I, when I look around And I think things over All of my good days Outweigh my bad days I, I won’t complain” – I won’t Complain by @Rev. PaulJones “Yet what we suffer now is nothing compared to the glory he will reveal to us later.” ‭‭Romans‬ ‭8:18‬ ‭NLT‬‬ @carlstonlindsay God bless you Irmão you fought with courage and intelligence. To share the Octagon with you tonight was an honor. I wish you the best in your career I pray that God blesses you and your family. My team and coaches had me prepared. I failed. I will make my adjustments. Grateful to be a part of @sanfordmma and in my next bout I will do a better job of representing my team and all that’s been taught to me in the future. The journey continues and there are many more Victories to Claim. I love fighting and I’ll continue to fight until the day I die. To God be the Glory. I’m blessed beyond measure. Mark Smith thanks for giving me the opportunity to defend myself. You’re an excellent ref. Back to work. The best is yet to come. – Love Tshilobo – Impa Kasanganay

What do you think is next for Impa Kasanganay after getting knocked out by Carlston Harris at UFC Vegas 37 and dropping to 2-2 overall in the Octagon?