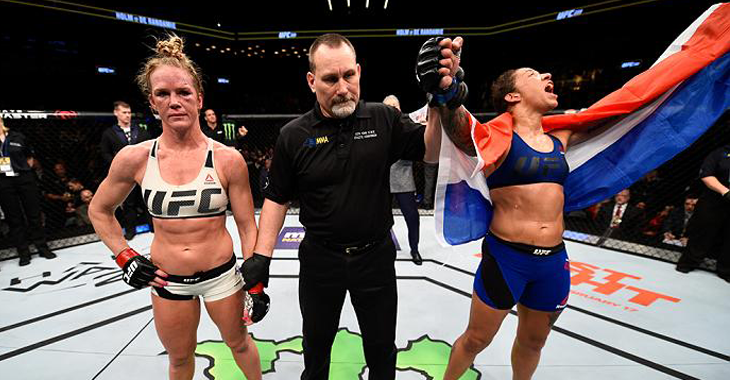 The inaugural UFC women’s featherweight championship ended with quite a bit of controversy.

Germaine de Randamie landed some of the biggest shots of the fight on Holly Holm after the bell rang to signal the end of the round. It happened not once, but twice, coming at the end of rounds 2 and 3. It was enough so that the former UFC women’s bantamweight champion and her team filed for an appeal of the unanimous decision loss to de Randamie a few days after the fight. The New York State Athletic Commission denied Holm’s appeal of the loss, which MMA Fighting confirmed and reported on Tuesday.

“After a review of the video footage of the bout, the New York State Athletic Commission determined that there was no clear error or violation of statute or rule by Referee Todd Anderson,” an NYSAC official told MMA Fighting. “Therefore, the scoring and outcome of the bout will not be modified.”

Holm’s agent Lenny Fresquez told MMA Fighting, ““We respect their decision and will not seek anything further, except a rematch from Germaine.”

De Randamie stated after the fight that the late shots landed on Holm were not intentional and has offered Holm a rematch. However, de Randamie stated that she has a hand injury that she first needs to get taken care of that will require surgery. This puts Cris Cyborg in an interesting situation as she was looking to take on de Randamie for the UFC featherweight title after declining to fight for the inaugural title with still having to recover from cutting weight to get down to the 140-pound catchweight limit in her last two UFC fights.

What matchup would you like to see next for the UFC women’s featherweight title? Sound off in the comment section!