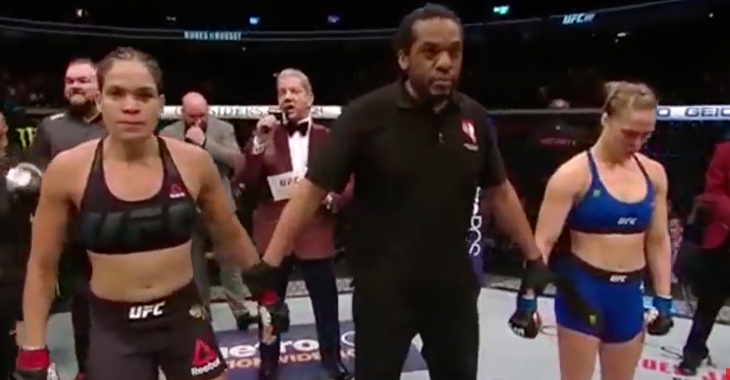 In the main event of UFC 207, former UFC women’s bantamweight champion Ronda Rousey returned to the Octagon to fight Amanda Nunes in a highly anticipated showdown.

Just 48 seconds into the fight, referee Herb Dean was forced to call a bout after Rousey continued to eat unanswered shots, noticeably out on her feet. That didn’t sit too well with Michael Rapaport, who appeared on Fox Sports 1 to explain that the stoppage was premature, and that he believes Rousey was saved by “white girl privilege”. “I think they stopped the fight too soon, and in my opinion that was white girl privilege working at its finest. That guy Lineker that same night, punched in the face, elbows. There’s been so many people in other fights, men and women in the UFC, that have taken more of a butt kicking. She was in trouble, it just seemed so quick. Let her go down, maybe she could recover. She wasn’t, but I think the referee jumped in…”

Herb Dean then responded to Rapaport in a video interview with TMZ in which he stated:

“There are a lot of people who have opinions about things but have no idea of the criteria that we officials use when we’re going to stop a fight.

Rapaport then responded during an appearance on ‘Fox Sports Live with Jay & Dan’, saying:

“Herb Dean is also I know, an ass kicker, so – Herb Dean, you know who I am Herb. I totally respect Herb, I think it’s cool he – listen, he knows way more about it than I do, and that most people do. I’m just a fan. But, I would love to ask Herb Dean this. Herb, have you ever seen a UFC pay-per view fight men, women, anything. The headlining fight, get stopped so quickly, where the headlining fighter didn’t get a chance to come back, or – can you tell me any other fight? I’m not an expert, but I’ve watched a lot of fights. I’ve never seen a headlining fight get stopped so quick. But I love Herb Dean, he’s iconic.”