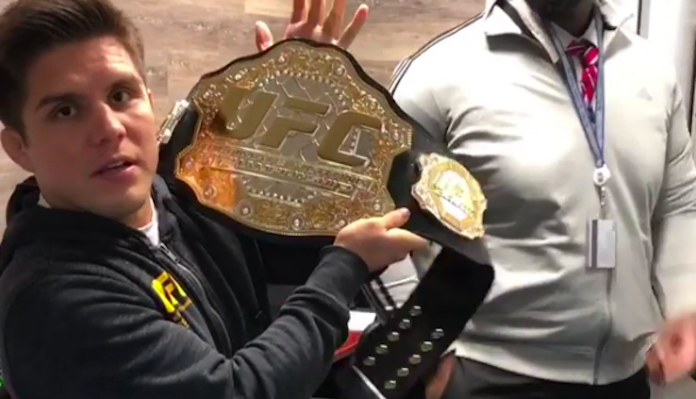 Shortly after winning the UFC flyweight title with a historic decision defeat of long-time champion Demetrious “Mighty Mouse” Johnson, Henry Cejudo jumped on a plane to Russia to enjoy the festivities of the promotion’s UFC Moscow card. As most UFC champions would on such a trip, he toted along his UFC belt. Unfortunately, the airline lost his luggage, which meant that he lost his belt.

Given that Henry Cejudo had already lost his Olympic gold medal in a house fire, this incident was particularly wild.

“Unfortunately, my belt is in my luggage,” Cejudo told reporters in Moscow. “So now, on top of my gold medal, now it’s my belt. I don’t know what it is about gold. I can’t keep it.”

While Henry Cejudo didn’t seem too bothered by the loss of his UFC belt, he’s now been reunited with it, and he looks to be pretty happy about that.

Cejudo announced this good news in a video on Instagram.

“Don’t you ever leave me again,” Henry Cejudo says to the title in the video.

Though the widespread opinion is that the former champion Demetrious Johnson deserves an immediate rematch with Henry Cejudo, he is currently recovering from an injury that has temporarily ruled out this possibility. In the meantime, it sounds as though Cejudo will battle UFC bantamweight champion TJ Dillashaw — though it’s not yet clear if they’ll fight for Dillashaw’s bantamweight belt, or the one Cejudo very nearly lost with his luggage. Stay tuned for updates on this potential fight as details emerge.