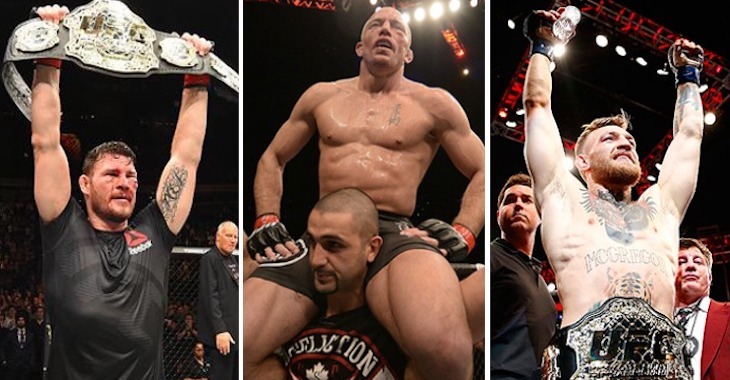 Last week, we learned that after months of rumors, reports, negotiations and stalemates, The UFC and Georges St-Pierre had agreed on the terms for a new contract. Given that St-Pierre is widely considered the best welterweight of all time – and one of the best fighters ever, period – this was an undeniably exciting development.

Now that we know St-Pierre will actually be returning to the Octagon, the next big question is who he’ll fight upon his return. Though there are plenty of interesting options for him inside the welterweight division he once ruled, his coach Firas Zahabi is most intrigued by fights with UFC middleweight champ Michael Bisping, and lightweight champ Conor McGregor.

Zahabi explained this feeling on Monday’s episode of The MMA Hour.

“My ideal scenario, I don’t know if it’s still up for grabs, but I was really happy when there was a buzzing of Bisping or McGregor,” Zahabi said. “I thought those two would be two epic fights. One, he would go a little lower [in weight]; one, he would go a little higher. But those are really, really intriguing fights. Of course, Tyron Woodley, he’s the [welterweight] champion and et cetera, but he has his fight with ‘Wonderboy’ [Thompson]. And if ‘Wonderboy’ wins, then they’ll have a trilogy. And of course we don’t want to fight with ‘Wonderboy,’ we go way back together.”

“So I think the welterweight title is not really something he (St-Pierre) is thinking about right now because of the current landscape, but there is always the 185-pound belt. And of course, McGregor is such a mega-star that if you put those two on a main event, I don’t think that anybody in the world wouldn’t watch that. I think that even non-MMA fans would watch that. But again, I don’t do the match-ups, I don’t do the managing, I’m just talking as a trainer.”

St-Pierre has not been seen in action since November of 2013, when he scored a controversial win over Johny Hendricks, defending the welterweight title in the process.

Who do you want to see Georges St-Pierre fight when he returns? Sound off, PENN Nation!