UFC standouts Dustin Poirier and Frankie Edgar were among a number of different fighters featured in booking announcements today.

The former UFC interim lightweight champion, Poirier (25-6 MMA), has been rebooked to fight surging division contender Dan Hooker on June 27 according to reports from Combate and MMAJunkie.

The key lightweight bout is contingent on the lifting of ongoing travel restrictions, as Dan Hooker will need to fly in from New Zealand. If “The Hangman’ is unable to enter the US due to COVID-19 restrictions, the bout is likely to be moved to “Fight Island” in July. 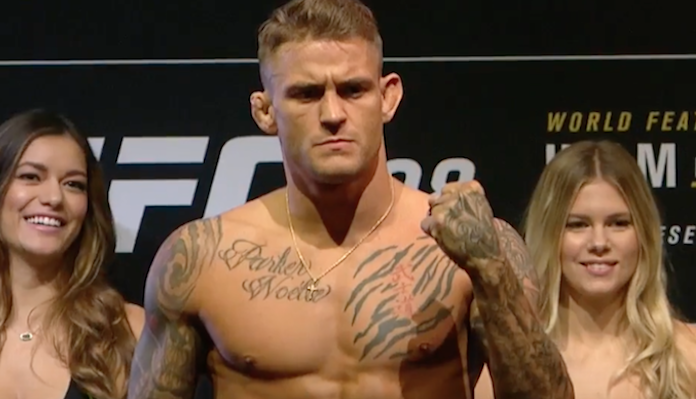 Dustin Poirier has not competed since suffering a third round submission loss to Khabib Nurmagomedov is his bid for the undisputed lightweight title at UFC 242. Prior to the setback, ‘The Diamond’ was riding a five-fight win streak.

Meanwhile, Dan Hooker (20-8 MMA) will enter the contest with Poirier on a three-fight win streak, his latest being a split decision victory over Paul Felder in February.

Another high profile bout that was announced today involves former lightweight title holder Frankie Edgar. ‘The Answer’ will make his bantamweight debut against Pedro Munhoz on July 11 according to MMAFighting.

Edgar (23-8-1 MMA) is coming off back to back losses inside the promotions featherweight division, his most recent being a TKO defeat at the hands of The Korean Zombie.

As for Pedro Munhoz (18-4 MMA), ‘The Young Punisher’ is coming off a decision loss to Aljamain Sterling in his most recent Octagon appearance at UFC 238. Prior to the setback, Munhoz had put together a three-fight win streak which included a knockout victory over former division champion Cody Garbrandt.

In addition to the Dustin Poirier and Frankie Edgar bookings, the other bout announced today was a key women’s flyweight bout featuring Cynthia Calvillo taking on Jessica Eye. That fight will headline a UFC card set for June 13 according to ESPN’s Brett Okamoto.

Eye (15-7 MMA) rebounded from her brutal KO loss to Valentina Shevchenko by scoring a unanimous decision victory over Viviane Araujo at December’s UFC 245 event. As for Calvillo, Cynthia will be making her flyweight debut at next month’s event following weight struggles at strawweight.

What do you think of the newly announced UFC matchups involving former champions Dustin Poirier and Frankie Edgar? Share your thoughts in the comments section PENN Nation!