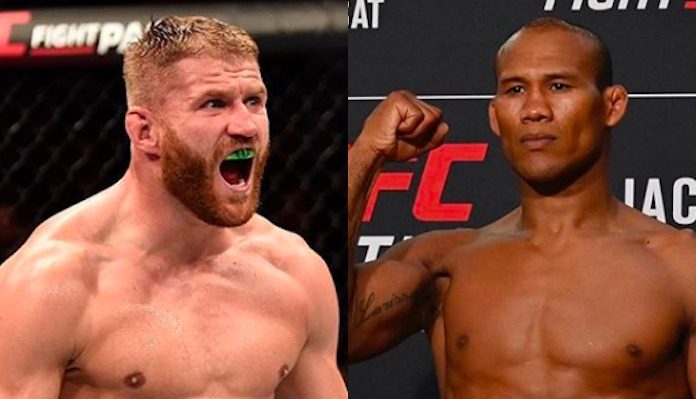 In the main event of UFC Sao Paulo, Jan Blachowicz is looking to make it two in a row when he welcomes Ronaldo Souza to the light heavyweight division. Heading into the fight, Blachowicz is a -200 favorite while ‘Jacare’ is a +160 underdog.

Ahead of the action, BJPENN.com reached out to several pro fighters to get their predictions. The majority are leaning towards Blachowicz and some see the Polish fighter getting another knockout win. Many also believe the size difference will play a factor.

Johnny Walker, UFC light heavyweight: I think Blachowicz will win. Maybe he can knock out Jacare just like the last fight against Rockhold.

Curtis Millender, Bellator welterweight: I think Jacare. I think he will be able to get Blachowicz to the ground and submit him.

John Salter, Bellator middleweight: Jacare doesn’t have a whole lot of holes in his game and has good striking and obviously the jiu-jitsu. I think Jacare will win.

Steven Peterson, UFC featherweight: I want to go with Jacare, but he hasn’t looked too impressive in his last few outings. Going against a powerhouse striker in Blachowicz, I think Jacare will have trouble setting up his takedowns and I think the power strikes will be too much for him. Jan Blachowicz by TKO in round one.

David Zawada, UFC welterweight: I think Blachowicz gets it done. He is the better striker, it will be a hard fight for him. Jacare has a lot of experience and is good on the ground. Blachowicz will be stronger and bigger and get the win.

Andrew Kapel, Bellator middleweight: A lot of people sleep on Jan. Jacare is a legend and is on the backside of his career with wars and is durable. I think Jacare could put Jan on his back, and Jan is a big boy and will be able to get up. I think Jan will win the fight, but I don’t think he will be able to finish the fight.

Who do you think will win the fight between Jan Blachowicz and Ronaldo Souza at UFC Sao Paulo? Let us know in the comment section.