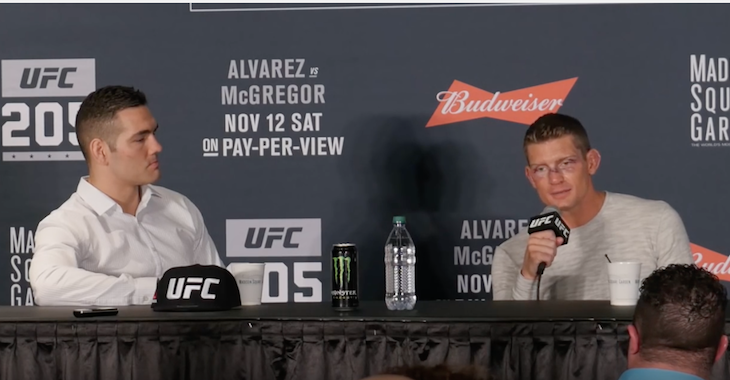 This weekend, the UFC will touch down in Buffalo, New York with UFC 210. In this anticipated card’s co-main event, former UFC middleweight champion Chris Weidman will take on dangerous Dutchman Gegard Mousasi. The bout will mark Weidman’s opportunity to bounce back from two straight losses: a TKO against Luke Rockhold, which marked the end of his title reign, and a thudding, third-round knockout dealt by Yoel Romero.

As Weidman’s shot at redemption looms on the horizon, his brother-in-law and training partner Stephen “Wonderboy” Thompson spoke to BJPenn.com’s Chris Taylor to discuss the former champ’s preparation for Mousasi.

“I mean even with Romero, [Weidman] was winning that fight [at UFC 205],” Thompson continued. “He just ended up catching a knee and sometimes that is just how it happens. That is what makes this game so exciting. You just never know what is going to happen. But yeah, Chris man, I’m telling you Weidman is just going to go out there and do work. I am going to be there, in-house, watching him fight to cheer him on. He will be ready to go.”

Do you think Chris Weidman can correct his current slump against the dangerous Gegard Mousasi? Sound off, PENN Nation!