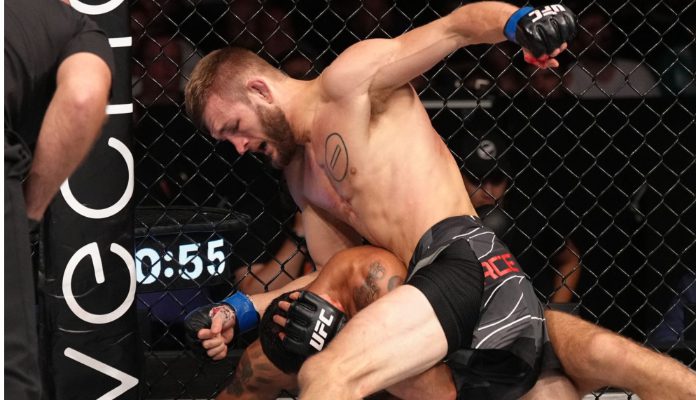 Throughout fight week, Pearce says he saw Amirkhani multiple times and when he did, the Fin would bully Pearce and not let him pass or size him up. After Amirkhani did it over and over again, Pearce says he couldn’t wait to share the Octagon with him and really hurt him.

“I really wanted to knock him out cold,” Pearce said to BJPENN.com. “All week this guy was bullying me and pushing me around, like would get in my way and wouldn’t let me pass him. I’m in a different country and don’t know their culture so I was so ready to get under those lights and I really wanted to hurt this guy after he disrespected me like that. I think he tried to get in my head and it didn’t work.”

Ultimately, Jonathan Pearce did just that as he scored a second-round TKO win over Makwan Amirkhani. It was a big win for Pearce who says sent a statement to the featherweight division.

“It was great man. It was what I expected, my goal was to go out there and do what some guys in the top-10 do and that was to finish Makwan early in the fight and that is what I did,” Pearce said. “It just lets everyone know I’m here and going to be a problem.”

With the win, Pearce improved to 4-1 in the UFC – including being 4-0 at featherweight. Yet, he still doesn’t care who is next as he will fight anyone but does hope a ranked opponent might be next.

“My coaches and everybody are trying to hold me back but I’m biting at the bit and want to get back in there soon. I want to put the ‘JSP‘ on these guys,” Pearce said. “I love to fight, I love to work hard. I don’t really care who it is, I’ll take a ranked opponent, I’ll take an unranked guy, a new guy, I’m ‘JSP’ I’ll whoop them all.”

Who would you like to see Jonathan Pearce fight next?