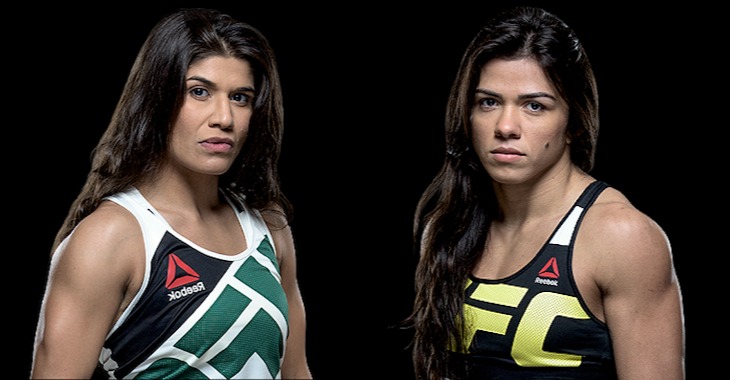 Back in August of 2015, former World Series of Fighting strawweight champion Jessica Aguilar made her long-awaited debut in the UFC’s Octagon. Her opponent in this Octagon debut was top ranked contender Claudia Gadelha.

Regrettably for Aguilar and her fans, Gadelha came out on top that night, capturing a hard-fought unanimous decision win. Almost two years later, however, the loss still bothers Aguilar, as she was dealing with a fairly serious injury throughout the fight. Given this unfortunate hinderance to her performance, she’s been eager for a rematch with Gadelha ever since.

“If [Galdeha] is on that path [to the title], then yeah, let’s do it again,” Aguilar said of a Gadelha rematch on the latest edition of BJ Penn Radio. “I guarantee that this time around the results are going to be different. I made a mistake last time and I went in with an injury, which is my fault. I take full responsibility for it, but the next time around, I’ll make sure that I’m 100% and the result will be different.”

“Not go into the fight injured,” Aguilar continued when asked what she’d do differently in a rematch with Brazilian. I went in with a top contender, with the number one contender, and she couldn’t finish me with a broken foot! With all due respect – I respect Claudia and I think she’s an amazing fighter – but if I was the top contender? We’re about finishing. Finish the fight. So that’ll be the difference.”

Aguilar has not been seen in the Octagon since this unfortunate loss to Gadelha, having been sidelined with injuries over the last year and a half. That said, she is targeting a return to action at UFC 211 this May 13 – provided she can find a willing opponent.

Gadelha is currently scheduled for a UFC 212 scrap with fellow contender Karolina Kowalkiewicz.

Would you be interested in a Jessica Aguilar vs. Claudia Gadelha rematch down the road? Sound off, PENN Nation!