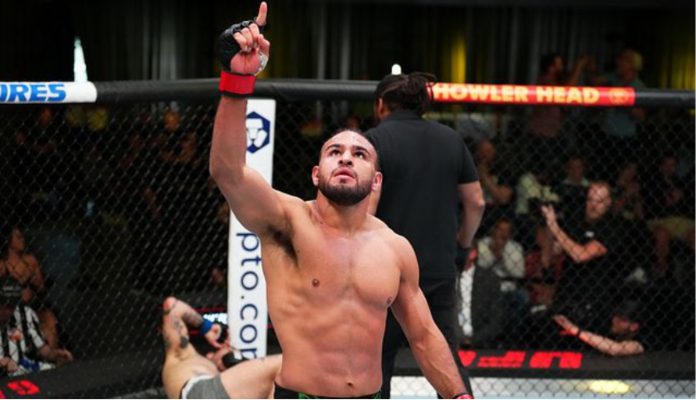 Gabe Green is excited to fight another highly-touted prospect.

Green is set to face the undefeated Ian Garry at UFC 276 in a very intriguing matchup. Although Garry has had a lot of hype since he joined the UFC, Green says he wasn’t all that familiar with the Irishman.

“To be completely honest I wasn’t even aware of who he was,” Green said to Just Scrap Radio on BJPENN.com. “After my last fight, one of my teammates told me I should fight Ian Garry next and I was like ‘who the heck is that guy.’ I was already a little aware of him right after my last fight. Sure enough, he was the guy who the UFC picked.”

“It seems to me that the UFC is giving me guys with some hype,” Green said. “Phil Rowe had a bit and I beat him, they were pushing Yohan before I fought him and they had high hopes for him and I beat that guy. I think the UFC has high hopes for (Garry) and I feel like I might win them over after I beat this guy.”

Against Ian Garry, Gabe Green says he plans to bring the fight to him. He believes if he pressures the Irishman he can have success.

However, Green also believes once he starts landing shots he will turn Garry into a wrestler.

“When I hit people they don’t want to stand with me. I bet he shoots. Look at Yohan, Yohan is a knockout artist and he was shooting on me, it is just what happens,” Green explained. “Ian might be a striker but he’s going to be after my legs… The one guarantee is I’m going to bring a fight. I’m going to entertain and perform and I’m going to bring a fight. The rest is up to Ian, is he going to fight me back or is he trying to run away from me? At the end of the day, he’s locked in a cage with me so I will bring the fight and we will see how he responds.”

“Every time I go out there I’m going for the finish, I hate going to the judges. I try and stay away as far from them as possible,” Green stated. “I plan on getting finishes from here on out… I have six rear-naked chokes on my record, the people that get knocked out are the guys who decide who want to stand with me. If they want to take it to floor, they get choked out, they give me what they want and I give them a way out.”

Should Gabe Green beat Ian Garry at UFC 276, he knows he will get the respect he deserves and he hopes he will start getting hype.

“I think at that point, it will put a sprinkle of respect that I have earned from anyone that has doubted me including the UFC,” Green said. “Maybe after this, they try to build a hype train around me.”

Do you think Gabe Green will beat Ian Garry at UFC 276?