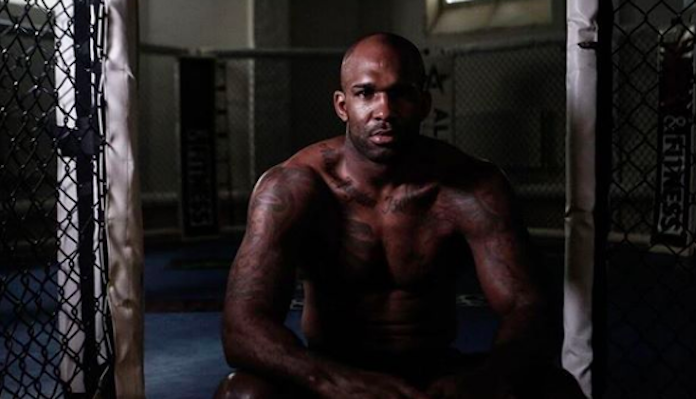 Jimi Manuwa is feeling the itch to fight again, but he’s not sure if it’s an itch he should scratch.

The long-time UFC light heavyweight contender retired in early June, days after an undeniably brutal knockout loss to Aleksandar Rakić. He did so with his health in mind, but admits the urge to dust off his gloves often out-muscles the concern that led him to retire in the first place.

“It’s always in the back of your mind, calling you,” a candid Manuwa told BJPENN.com as he drove across his native London, England. “For me it’s very hard. It’s only been a few months since I fought. My mind is still kind of in it, my mind isn’t processing it all. [My retirement] is still in it’s infancy.

“I’m just trying to suppress the feeling and focus on other stuff.”

The Brit is quite hard on himself when he looks back on his last fight. It’s far from the way he intended to finish his career. That’s part of the reason a comeback is so appealing.

“That’s a fight where, again, I wasn’t switched on,” he said of his loss to Rakić. “Everybody would want to [end it on a more positive note], but you’ve got to put those things aside.

“It’s my health that I’m talking about. It’s not the actual loss — it’s a knockout loss.”

Manuwa also regrets the opportunities he missed out on at the height of his fighting career. For example, he never had the opportunity to compete for the UFC light heavyweight title — though he came incredibly close.

Mid-way through 2017, he stood out as the top contender in the light heavyweight division, and appeared to be right on the cusp of a title fight with Daniel Cormier. Regrettably, the decision to accept a fight with Switzerland’s Volkan Oezdemir wound up back-firing. A quick knockout loss derailed his win-streak and greatly deflated his claim to a title shot.

“I took that fight Volkan fight when I didn’t have to,” he said. “I could have waited and fought Cormier. I really regret that; that I didn’t fight Cormier in my career.”

Before that fight with Oezdemir, Manuwa and Cormier shared some very public beef. The Brit says the animosity he felt at the time was legitimate, but he decided to let it go when he learned Cormier was just trying to generate interest in their potential fight.

“I really disliked him,” he recalled. “He was the first fighter, at the time, that I had proper beef with. It would have been on-sight beef, not just UFC beef where everyone’s faking, cause where I’m from, beef is beef, and it’s on-sight. That’s how it was when I was growing up. That’s why I’ve never had any beef with any fighters, because I know how serious I take stuff like that.

“After that he DM’d me and said he was just trying to sell the fight or whatever,” Manuwa continued. “We actually met for the first time [after UFC 214] — we fought on the same card — I lost to Volkan and he lost to Jon Jones. We spoke the next day after his fight, and I met his kids, and we’ve respected each other ever since then.”

While Manuwa ended up squashing his beef with Cormier, he remains confident that he was a nightmare matchup for the American at the time.

“I think styles make fights, and my style would have been all wrong for Cormier,” he said. “I was really confident in my camp and how that fight would have gone.”

By the time Manuwa retired, he’d stumbled quite a distance from title contention. He understands that things have not changed since then; that he’d likely have to work his way back up if he returned to the cage. All the same, he’s confident the UFC would happily welcome him back into the fold due to his fan-friendly fighting style.

He’s as close to surefire entertainment as you’ll get in this sport.

“I’m sure they would be glad to [have me back],” he said, clarifying that he’s still under contract with the promotion. “I’m always an exciting fighter. My fights speak for themselves. I’m never in a boring fight. I know they’d be willing to if I wanted to, that’s not something I’m worried about.”

That’s good news, considering Manuwa says it’s “UFC or nothing” for him — at least in terms of MMA.

While the Brit would not be willing to fight for another MMA promotion, he would leap at the chance to meet fellow Londoner David Haye in the boxing ring.

For a time, Haye and Manuwa were just a few signatures away from a high-profile boxing match that would have dominated attention across London and much further afield. The negotiations for this fight fizzled after Haye lost his rematch with Tony Bellew, but Manuwa believes the fight is still possible.

“It was really close [to happening],” he said of a boxing match with Haye. “We both spoke to each other. I flew to Vegas to meet with [UFC President] Dana [White] and we had a three-way conversation. The fight was on. He agreed to fight after his Tony Bellew fight. It was all provided he beat Tony Bellew in the rematch, then he’d fight me four months after that, but he lost and then retired after that. It all went down the drain and I was devastated — not devastated, but f**king pissed that fight never happened. That would have been a huge fight for London.

“David Haye’s not doing nothing [now],” he added. “He’s managing fighters and all that, but deep down, I know he wants the fight.”

Suffice it to say that Jimi Manuwa has options, even in retirement. It’s just a question of whether or not he wants to pursue them, and that, for the moment, is a decision he’s yet to make.

“I’ve not really discussed it with [my family],” he said of a potential comeback. “I don’t think my family are too keen on it, but they always respect my decisions and ability. I really don’t know. I’ll see how I feel. I haven’t even been training.

“I don’t know man, I’m not betting man,” he concluded with a laugh when asked how likely he is to fight again. “I might start feeling it soon. Maybe a boxing match that comes up… I don’t know, we’ll see.”