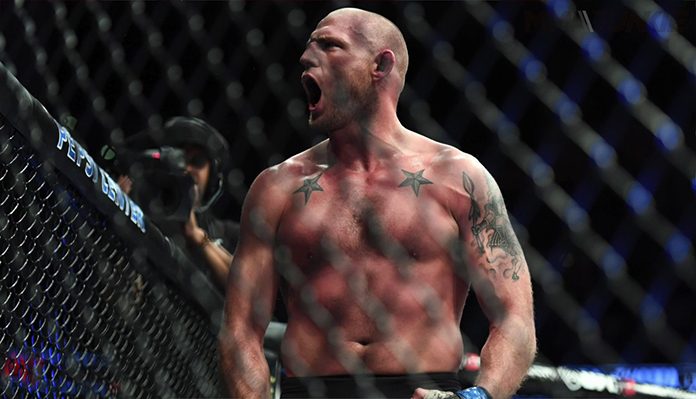 Despite going a perfect 4-0 in the UFC, middleweight fighter Jordan Johnson may be taking his talents elsewhere now that he has fought out his latest contract with the promotion.

Johnson entered the UFC as a light heavyweight. He defeated Luis Henrique da Silva, Marcel Fortuna, and Adam Milstead despite a substantial weight difference. Johnson then moved down to middleweight for his fourth fight in the UFC. Although his division had changed the outcome was the same. Johnson got his hand raised for the 13th straight time (10-0 professional, 3-0 amateur).

However, “Big Swingin'”, finds himself in a rather peculiar predicament: he’s a 29-year-old undefeated fighter without a contract.

“I actually talked to one of my buddies who works for the UFC,” Jordan Johnson revealed. “He’s pretty high up at the UFC, but the UFC is just a machine. It’s not emotional. They [UFC] take you and punch you into their program and that program spits out a number. It tells them how much they [UFC] should invest and what kind of return they think they can get. That’s all it is. The UFC is all marketing.”

“You got Derrick Lewis who is good, he has won nine of his last 10 fights, but then you also got Stipe Miocic who is the best heavyweight of all time,” Johnson continued. “All Derrick Lewis did is say his balls were hot and now he is fighting for a world title over Stipe. The UFC is not about who is the best fighter.”

Johnson raises some interesting points. In today’s MMA culture it seems winning your fights just isn’t enough. You need to have the total package. That is something Johnson has been working hard at in recent months.

“I’m a pretty quiet guy and I keep a small circle. When people first meet me, they think I hate them because I’m so reserved”, Johnson joked. “I used to not put any effort into these interviews but like I said you can’t just be a great fighter in this industry. I’ve been recently making an effort to let people get to know me and not be so reserved.”

Johnson’s efforts have not gone unnoticed. His post fight interview at UFC Fight Night 136 was the first time many fans got the opportunity to see his personality shine through. And if fans liked what they saw from Johnson on that night, wait to they get a load of the new outspoken Johnson.

“The truth is, I’m the best fighter that is in the UFC — or that was in the UFC.”

Let us know what you think. Will Jordan Johnson end up resigning with the UFC? Or will Jordan be the latest fighter to jump ship and sign with Bellator MMA?