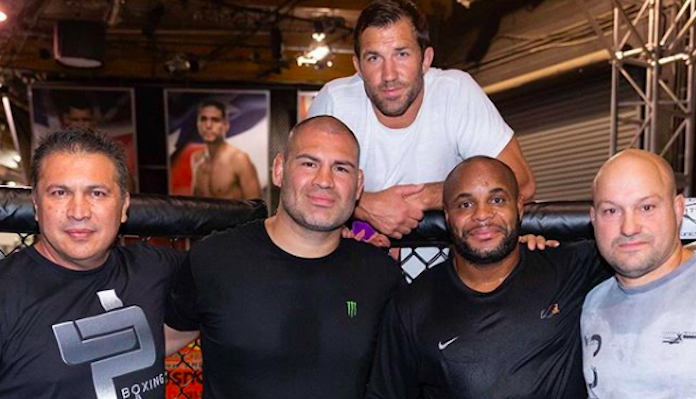 For many years, Luke Rockhold was one of the most visible and successful fighters training out of American Kickboxing Academy, and a crucial training partner to both Daniel Cormier and Cain Velasquez. Over the last year or so, however, Rockhold has done much of his training elsewhere. The former middleweight champion even did some training at Combat Club in Florida at a time when Volkan Oezdemir was using the gym to prepare for a fight with Cormier.

All the same, you will not be hearing of any drama between Luke Rockhold and American Kickboxing Academy.

Speaking on the latest episode of BJPENN.COM Radio, AKA head coach Javier Mendez assured that his relationship with Rockhold is essentially bulletproof, and that Rockhold will always be welcome at the gym.

“Luke Rockhold’s my boy,” Mendez said. “I love that kid. He’ll always be with me no matter where he goes, no matter who trains with, and he’s always welcome with me. He always has my attention whenever he needs it, you know, and he’s here now. He’s here for another week. I’ve been training him. I wouldn’t expect it to stop. If he feels okay now, he’s going to go back to Florida or wherever he wants to go, I’m a big, giant Luke supporter. I’m going support Luke in any way he needs me to support him.

“There was times in my life as a coach where, you know, I needed someone to come to my rescue, [without] knowing it, and you know who comes to my rescue? Luke Rockhold. So who am I to all of a sudden decide, well, you don’t train with me, so you’re no longer part of me? No bullshit. He’s part of my heart forever. No matter what he does, he’s my boy. He’s my boy, always will be my boy.”

Luke Rockhold is not the only fighter that Javier Mendez has this kind of ironclad relationship with. He says both Muhammed “King Mo” Lawal and BJ Penn, both of whom have long stopped training under Mendez, will also always be welcome to come back.

“I look at all the guys that I personally get involved with, like Rockhold, they’re all my guys,” he explained. “King Mo, same thing. King Mo is with American Top Team. Do you think I care less for King Mo and want him to be less successful? No. King Mo is my boy always.”

“BJ, same thing. BJ’s my boy. It doesn’t matter. I trained BJ, started him out for a little over two years. You think that all of a sudden I’m not BJ’s guy? Hell yeah. BJ is my boy for life. That’s the way I am with my guys and I will always be that way because it’s not … Things change, you know? People’s lives change, people’s priorities change.”

“You really are a true friend and you really have a great relationship with you guys, then you will love them no matter where they go.”

Luke Rockhold, who is currently sharpening his weapons at American Kickboxing Academy, will return to the Octagon on November 3, when he rematches Chris Weidman at UFC 230 in New York City.