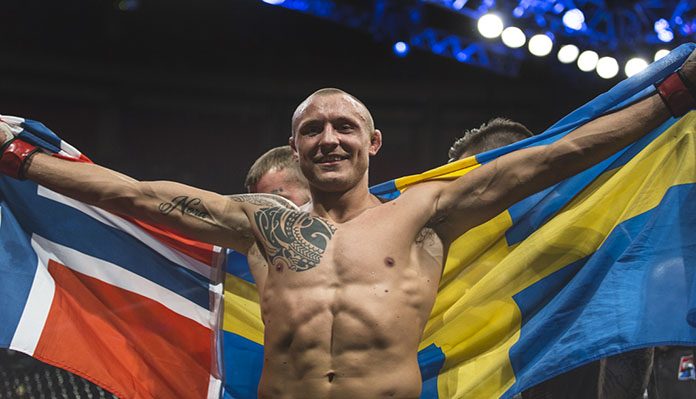 Fresh off his most impressive victory to date over the weekend, Sweden’s Jack Hermansson says he is ready to get right back to work.

Hermansson made quick work of David Branch in the co-main event of UFC Philadelphia on Saturday night. “The Joker” needed only 49 seconds to submit the Renzo Gracie black belt with a brutal guillotine choke.

“Im very happy with my performance,” Hermansson told BJPenn.com in a recent interview.

“To be able to finish a good grappler like Branch in the first round with a submission, you know, I got to be happy with that.”

According to Hermansson, the fight pretty much went how he envisioned. “The Joker” did his homework on Branch and knew what the Renzo Gracie black belt was going to do before he did it.

“That guillotine is something that I’m hitting all the time in practice, and I’m very confident in it,” he explained.

“I had a plan, if I got him (Branch) to the ground I knew he was going to try and dig an under hook to get up, or he is going to turn away. Both of those options present the guillotine for me. So I knew if I got the opportunity, I was going to go for it 100%.”

Indeed it looked as though Hermansson was one step ahead of Branch during their short contest. However, coming into UFC Philadelphia, Branch was ranked as the No. 11 middleweight in the world. But as Hermansson will tell you, things have changed up a bit.

“The rankings are updated now,” Hermansson said. “I managed to get that No. 10 spot, so I’m very happy about that.”

“I think this win was a statement, and I think people agree now that I deserve the spot that I am in. I’m looking forward to more performances like that in the future and hopefully everyone will be watching.”

There is no doubt people will be watching, and not just in the states either. Hermansson proudly lives in and fights out of Norway. He hopes to fight on the upcoming UFC Stockholm card in June and would like to become one of the faces of Nordic MMA.

“Id love to get back at it soon,” Hermansson said when asked about his next fight. “There is a Stockholm card coming up, we talked a little bit about that so we can see if anything can happen there. Id love to have a good opponent but it is short time for that event so we will see. But I like to be active so I won’t be away for a long time.

“I’m always trying to represent Norway and Sweden the best I can. And I’m happy to be one of the few guys over here that’s up there in the top now. I hope they will use me, both to promote Norwegian MMA and to make the sport grow bigger here.”

Professional MMA is illegal in Hermansson’s home of Norway but he is championing an entirely new ideology for the growing MMA scene.

“Unfortunately professional MMA is not allowed, so we cant have events in Norway yet. But I will be happy to be one of those names that can put some pressure on the politicians and hopefully we will get it allowed soon.”