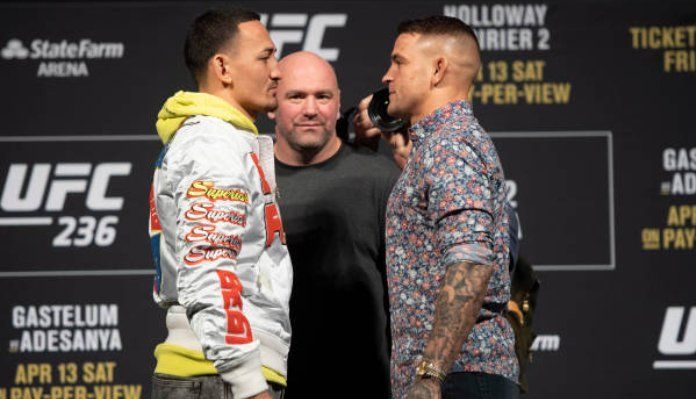 The UFC’s lightweight division will hopefully get a little more organized come UFC 236. In the main event, featherweight champion Max Holloway will move up in weight to take on Dustin Poirier for the interim lightweight championship.

However, some fans aren’t thrilled about this matchup, as they thought Tony Ferguson or another lightweight contender deserved the opportunity to fight for gold. American Top Team owner Dan Lambert is not one of those people.

“Man, when I was looking at the list of possible match ups for Dustin, coming up Max wasn’t at the top of my head,” Lambert said recently on BJPENN Radio. “Max, now that I think about it though, it makes sense. Max is fricking huge. For a 145’er, Max is not going to be small one-fifty-fiver. He’s on a crazy run. He’s just tearing guys up. He’s just going to stand and bang. Dustin’s going to stand and bang.

“I wasn’t thinking of Max, now that they booked it, I’m like shit man that’s a really good fight,” Lambert continued. “Maybe there’s a reason these guys make the big bucks and do what they do and set these fights ’cause, I mean if you don’t want to see Max Holloway fight Dustin Poirier, go watch basketball or something.”

This fight will be a rematch of 2012 fight, which served as Holloway’s UFC debut. Poirier won the fight via submission. The two have since gone their separate ways with Holloway becoming the featherweight champion and Poirier has become a top contender at lightweight.

Are you excited to watch Dustin Poirier fight Max Holloway for the interim lightweight championship at UFC 236? Sound off in the comment section!