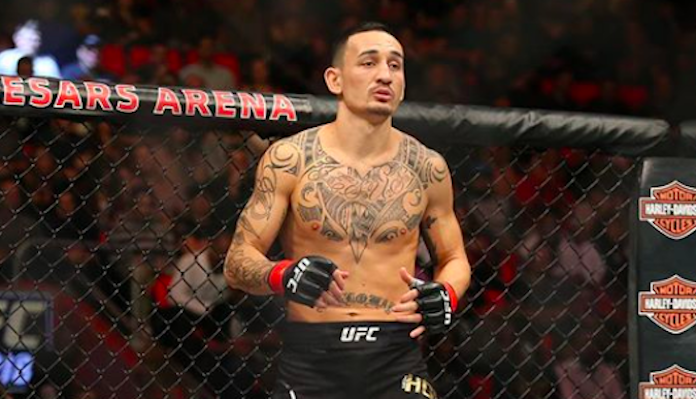 According to ESPN’s Brett Okamoto, Max Holloway will be moving up in weight at UFC 236 to take on Dustin Poirier for the UFC’s interim lightweight belt.

Holloway was last seen in action at December’s UFC 231 event in Toronto where he TKO’d the previously undefeated Brian Ortega to defend his featherweight belt. Holloway is riding an impressive 13-fight winning streak with notable wins over Jose Aldo, twice, and Anthony Pettis among others.

Meanwhile, Poirier and Holloway previously fought in Holloway’s UFC debut back in 2012. Poirier submitted the current featherweight champion in the first round, thus handing Holloway his first professional loss.

Poirier was last seen in the Octagon back at July’s UFC on Fox event in Calgary, where he defeated former lightweight kingpin Eddie Alvarez by TKO in the second round.

Poirier was later scheduled to fight at UFC 230 against Nate Diaz, but was ultimately forced to pull out with an injury.

Many speculated an interim title fight would be created given the fact current champion, Khabib Nurmagomedov has made it public he will not fight until November.

UFC 236 is set for April 13, and the venue has also been revealed. According to Okamoto, the event will take place at the State Farm Arena in Atlanta, Georgia.

Here is what UFC 236’s fight card looks like so far.

Who do you think will win the interim lightweight belt between Max Holloway and Dustin Poirier? Sound off in the comment section, PENN Nation.