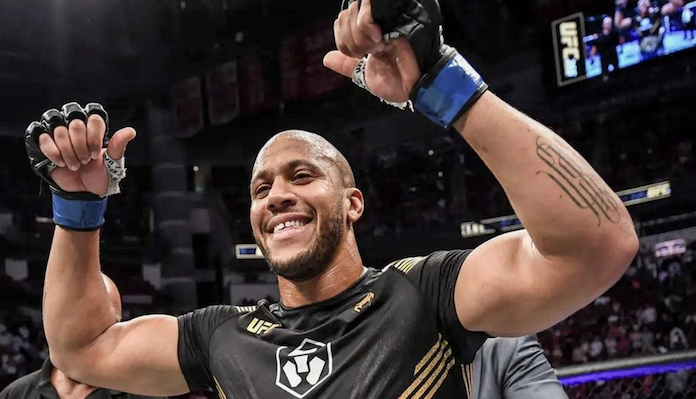 Ciryl Gane never expected he would be fighting for UFC gold in just his 10th professional MMA fight.

Gane signed to the UFC at 3-0 and quickly rose up the heavyweight ranks. In his 10th professional fight, he headlined UFC 265 against Derrick Lewis for the interim heavyweight title. For the Frenchman, he says he always knew he would fight for UFC gold but didn’t think it would happen this quickly.

“No, we didn’t expect that. It’s too short (laughs). We knew one day, of course, (I would fight for the title),” Gane said to BJPENN.com. “We worked a lot, we improved a lot and we are really confident we can do something.”

Entering the fight, Gane said he wasn’t nervous at all as he was extremely confident he would get his hand raised. That ended up being the case as he got a third-round TKO victory, and for Gane, he says the way Lewis fought him is exactly how he prepared for him to fight.

“Not really, no. We were really prepared. The right hand, if you saw the fight, every time I had my guard by my head (to avoid the right hand),” Gane explained. “It was very similar to my second fight in TKO against Adam Dyczka because he was a big man with a big right hand. He had a lot of KO’s with the right hand, very dangerous and I did exactly the same. We did very well on Saturday.”

Although Gane had finished three of his first six opponents in the UFC, his first two UFC main events went the distance. After that, “Bon Gamin” had heard all the talk that he was a boring fighter and someone who only goes the distance.

However, entering his fight against Lewis at UFC 265, Gane says that never impacted him at all. Instead, he knows he has a good fight IQ and won’t rush anything if it isn’t there. As for him, getting the win is all that is important.

“I have a good fight IQ. If I can finish the fight, I will finish it. If I feel comfortable with that and if I can, if I have the conditioning, I will finish the fight if I can, of course, every time,” Gane said. “I know the people say, ‘oh you don’t finish fights,’ but it’s not really like that. Some people can’t feel what’s happening inside the cage. When you are face-to-face with the cage, it’s something else and I have good fight IQ, so I’m okay with winning anyway.”

Despite the fact Ciryl Gane says he doesn’t rush anything and won’t force the finish, he still got the stoppage in the third round. At that point, he noticed Lewis’ power wasn’t there and he was still technical enough to pick his shots perfectly to get the stoppage.

When the fight was called, Gane knew it was one of the better performances of his career.

After the win, Ciryl Gane knew all the hard work was worth it as he can call himself a UFC champion. He has since been bombarded with messages from people in France watching early in the morning celebrating and cheering.

Yet, for Gane, he says the most important thing for him was being able to give the belt to his coach, Fernand Lopez.

“I’m happy but the most important thing for me was the emotion on the face of my team, my family, and every fan of me in my country,” Gane concluded. “This was really crazy, people were sending me videos of them in front of the TV at 6 a.m. to watch my fight. Wow, so my emotion… For me, it was a present for my entire team, my family, and everyone who supports me. This is my present for the people around me.”

Were you impressed with Ciryl Gane’s win over Derrick Lewis?