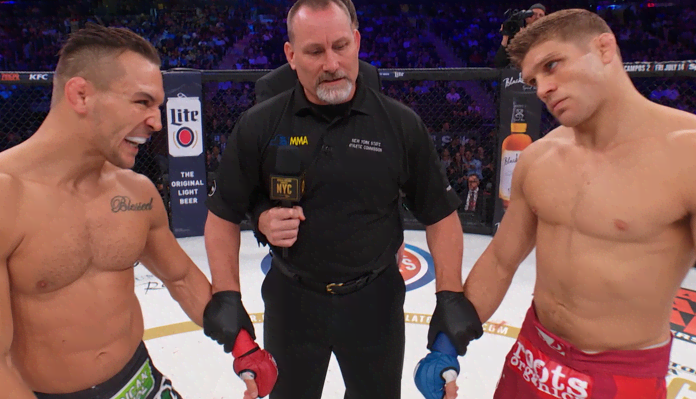 Brent Primus is not a fan of Michael Chandler and hopes their trilogy fight can happen.

Primus and Chandler originally met at Bellator NYC in June of 2017 where Primus beat the champ by TKO via leg injury in the first round. The two then had a rematch a year and a half later at Bellator 212 where this time it was Chandler who got his hand raised by decision win the belt back.

Since their two fights, Chandler went on to lose the title to Patricio Freire while Primus has gone 2-0. Now, the American Top Team Portland product is hoping the trilogy happens very soon.

Since their two fights, the rivalry has not let up one bit. Both have trash-talked each other in interviews and it seems like it’s only a matter of time before they fight again.

But, for Brent Primus, why he wants the trilogy is due to the hatred he has towards Chandler. He says Chandler is not a good person and wants to expose him inside the cage.

“I think he is the biggest poor sport punk a*s in the world. I can’t stand him. Like when I beat him in New York and I remember Scott Coker walking in the cage saying what’s wrong? Chandler is like my leg is broken I can’t move it,” he said. “I heard him say that and then after that, he did the Ariel show he said my leg was fine it wasn’t broken I could have kept on fighting. Like man, this guy is a liar. We were at a photoshoot and he was cool to me then the next day he did an interview just talking some s**t. This guy is two-faced and a fake dude and I can’t wait to expose him.”

Although Primus lost the last fight, he knows he has what it takes to beat Michael Chandler. He thinks he has the better ground game and striking and can knock out the former champ.

In the end, Brent Primus is focusing on the belt and getting a title shot against Patricio Freire, and after that, he wants the trilogy with Chandler.

“I want the belt and if I get the belt the Chandler will happen. I know I can beat Patricio as I am 100 percent confident,” he concluded.

Do you think we will see Brent Primus vs. Michael Chandler 3?