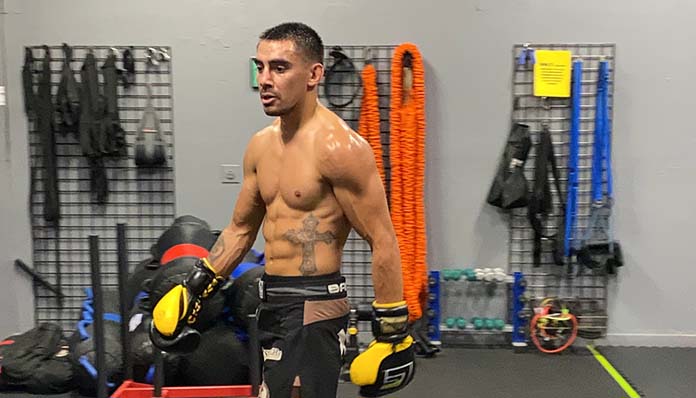 Andres Quintana, the 2018 Combate Tournament winner in the featherweight division, makes his long awaited return at Fury FC 53 “Dana White Looking for a Fight” on November 14th in Denver Colorado. We caught up with him in Albuquerque New Mexico where he currently trains at Luttrell/Yee MMA.

Andres Quintana is returning from a 2-year lay off with an impressive record of 18 wins (11KOs) and 3 losses. He believes having such a big record has hindered his ability to land fights as well. His contract with Combate ended about a year ago when he decided not to re-sign with the promotion and test free agency. He has had many opponents back out of fights that he has signed for, from CFFC, LFA as well as Fury FC. “I’ve had multiple opponents fall out and back out just because like how we’ve talked before about my record and they believe they can find easier fights. I give props to my opponent, he’s going to be tough of course everyone is tough, can’t wait to step in there and show them what I got.”

Andres recently signed with Iridium Sports which he believes is the right move to get him into the UFC. “Iridium is one of the biggest companies management wise in MMA. I believe they just signed 100 people to the UFC, so I feel like after this fight I’ll be able to get my foot in the door.” Andres knows what’s at stake come November 14th, as he is no stranger to capitalizing on big opportunities. “It’s a little nerve racking cause you only get 1 chance. A while back I fought in a big tournament and I fought only a 1 rounder to get into the tournament so it’s like hey you can’t mess this up you know, so you have to go out there and fire on all cylinders and make sure you don’t make any mistakes.”

When asked how he felt about his upcoming fight, Andres had this to say; “I’m very excited. It’s been over 2 years since I’ve actually competed in MMA. I train everyday we go out there and grind. I help other people get ready for their fights but it’s not the same stepping in there and actually doing what you love and it’s great that I’m going to be fighting in front of Dana White.” Andres is hoping to impress Dana and fulfill a life long dream of making it to the UFC.