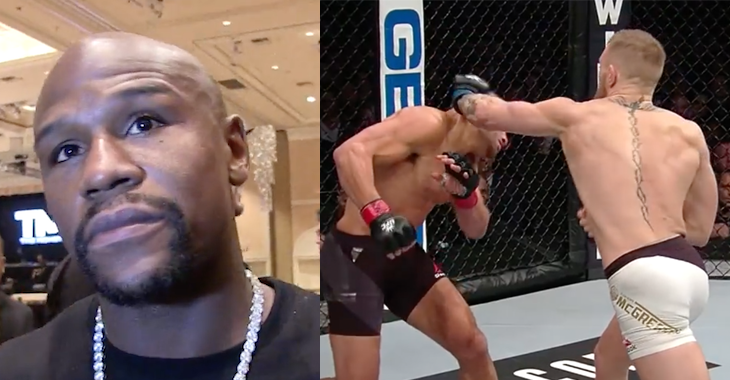 Before Mark Henry and Eddie Alvarez took on Conor McGregor in the Octagon, the coach of the then-UFC lightweight champion didn’t have a lot of good things to say about McGregor.

With campaigning for fights for both his students, Frankie Edgar and Eddie Alvarez, Alvarez was the one tasked with taking on the Irish superstar at UFC 205. “The Notorious” ended up winning in the second round by TKO, putting on a stellar performance and became the first fighter in history to simultaneously hold two separate UFC weight division titles.

With McGregor now only set on fighting Floyd Mayweather in a boxing match for his next competition, Henry believes that “The Notorious” has a chance to knockout the undefeated boxing legend.

“It’s like I said, the swing that he has is unbelievable,” Henry told Starsport.

“I think he would have the possibility of knocking out Mayweather. He’s way bigger than Mayweather too.

“Boxers only cut about ten pounds, whereas Conor probably walks around at 173lbs. So he’s also a lot bigger than Mayweather too.

“I even think he has a chance of knocking out Mayweather if it was in the first three to four rounds. After that, I’d definitely give the edge to Mayweather.”

Although Henry feels that the fight would sway in Mayweather’s favor deeper into the fight, he says that there are a few aspects of Conor McGregor’s game that give him more than a chance at putting the 39-year-old retired and undefeated boxer to sleep.

“You know Conor, his defence isn’t as good as Mayweather. But Conor’s speed, power, and precision is unbelievable,” Henry stated.

“After watching that fight, I’d even give a possible chance of knocking out Mayweather early.

“I don’t think it’d go his way, but I definitely give him the chance of a KO because his power isn’t something I’ve seen (before).”

Do you think Conor McGregor could KO Floyd Mayweather in the boxing ring? Sound off in the comments!