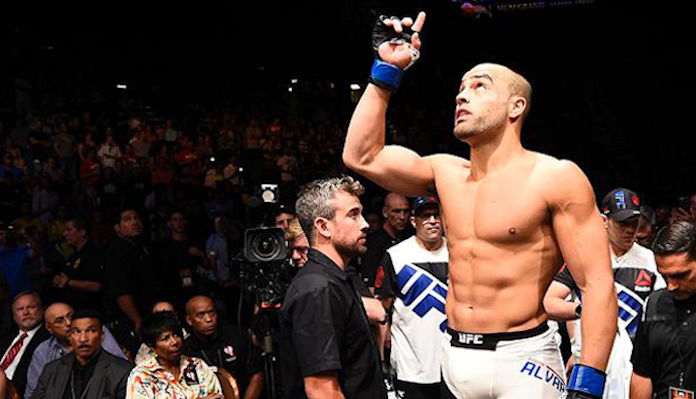 Last night, after much back-and-forth, we learned that a rematch between former UFC lightweight champ Eddie Alvarez and surging contender Dustin Poirier will officially go down this July 28 in Calgary, Alberta, Canada. The negotiations for this fight were not exactly breezy, but both fighters have agreed to it, and it’s a go.

See you in Calgary @DustinPoirier best of luck my friend 👊🏻@ufc

Speaking in an Instagram Live video session shortly after he signed his contract, Alvarez detailed the negotiations for the bout, and divulged that he’s not exactly thrilled with the matchup.

“Regardless of what Poirier says, I was given one bout agreement with Poirier – I signed it and we fought,” Alvarez said in his video (transcribed by Jed Meshew for MMA Fighting). “You guys all saw that fight and can judge for yourself what happened.”

“I think with a win over Dustin I get right in the title picture,” he added. “There’s not too many guys in the division that excite me to fight. To be honest, Dustin doesn’t even excite me but he’s been winning, I respect him, and the UFC wants it to happen so I’m doing it. I really only want to fight like, Khabib [Nurmagomedov] or fight someone like Nate [Diaz], a bigger name, a name that people respect, a name that a lot of people will think highly of. So they’re probably the only two guys that would do anything for me to up what’s going on in my career. Dustin, I’m not super excited about fighting him but I will.”

While there will not be a UFC belt on the line when Alvarez rematches Poirier in Calgary, there will be an unofficial and highly respected title on the line: the title of MMA’s most violent fighter, which fans unanimously agreed Alvarez had earned when he knocked out Justin Gaethje in December. Alvarez plans to defend this title against Poirier, another patron saint of blood n’ guts.

“Hopefully I can defend my title on July 28,” Alvarez. “That is UFC’s Most Violent One of All, yours truly. I made the title up, I won it, I’m the self-proclaimed Most Violent Man on Earth.”

Who do you think comes out on top when Eddie Alvarez and Dustin Poirier step into the cage in Calgary?