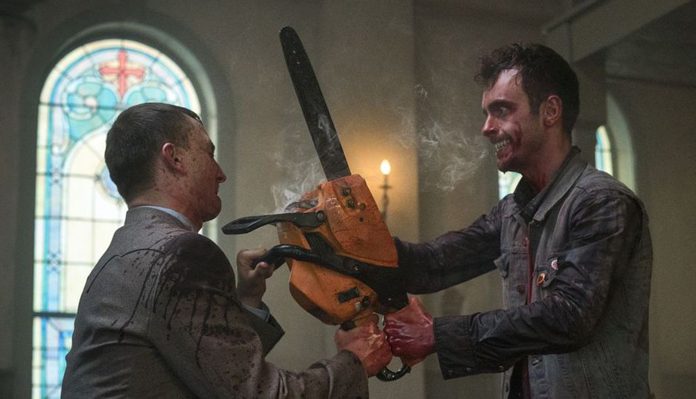 Trouble tends to find the gang on AMC’s Preacher. Throughout their quest to find God, Jesse, Cassidy and Tulip have gotten into their fair share of brutal scraps. That tends to happen when you’re a vampire, a pistol-packing badass and a former man of the cloth with the power to control others with a single command.

For a sneak peek of the insanity that ensues when Jesse and the gang visit Angelville, check out the trailer for Preacher season three…

The blood-spewing brawls on Preacher, which premieres its third season on June 24th at 10/9c on AMC, call to mind some of the most insane, jaw-dropping fights from pop culture history. Read on for a tribute to some seriously WTF mayhem. Warning: these fights are not for the squeamish.

Vampire on a plane, Preacher

Preacher fans love Cassidy for his filthy rants (the guy has some opinions on baby foreskin) and his loyalty to pals Jesse and Tulip. But what the eternally cool vampire excels at best is blood-spurting violence. In season one of Preacher, Cassidy’s hand-to-hand combat skills were put to good use when a team of vampire hunters tried to take him out mid-flight. Unfortunately they didn’t bank on Cassidy raising the “stakes” and turning their weapons against them in a furious fight scene. Everything is a weapon in this snarky vampire’s hands, be it a golf club or a champagne bottle. Always the resourceful one, that Cassidy.

One man, armed only with a hammer. A hallway filled with bloodthirsty goons brandishing pipes and other weapons. What ensues is the single-take hallway fight sequence to end all single-take hallway fight sequences. Often imitated but rarely topped, Park Chan-wook’s influential crime film is a triumph of both fight choreography and the power of the human spirit. Even with a knife in his back, Oh Dae-su (Min-sik Choi) leaves anyone who stands in his way flat on the ground.

The Kill Bill movies are overflowing with insane fight scenes. (The Bride versus the Crazy 88 definitely has the biggest bodycount.) But the fight that always has us on the edge of our seat comes early in Kill Bill: Volume 1 when The Bride (Uma Thurman) faces off against Deadly Viper Assassination Squad member Vernita Green (Vivica A. Fox). The Bride rings her target’s doorbell, and a fight breaks out with knives, a frying pan and other common household items. Things get even more insane when Vernita’s daughter arrives home from school and mommy and The Bride have to hide their weapons. The fight ends with Vernita firing a gun through a cereal box before taking a knife to the heart ably thrown by The Bride. In a split second, Vernita goes from mommy dearest to “mommy dead-est.”

The bounty on John Wick’s (Keanu Reeves) head gets ugly when the gun-toting hitman tangles with some assassins in a busy subway station. In between trading shots with Cassian (Common) across a fountain and a crowded tunnel, John uses his attackers’ weapons to his advantage in creative ways. (Pencil, meet ear!) After a brutal fight on the train, John leaves Cassian alive with a knife stuck in his aorta as a “professional courtesy.” John Wick: classy and deadly.

When Ron Burgundy (Will Ferrell) and the Channel 4 news team wander into a rough neighborhood, they run afoul of their rival evening news crew led by the trash-talking Wes Mantooth (Vince Vaughn). More news teams (including PBS and the Spanish-language channel) show up, leading to a hilariously over-the-top rumble with the well-dressed reporters brandishing guns, knives, chains and other weapons right out of West Side Story. After the skirmish, the Channel 4 team marvels at how quickly the fight escalated. Brick (Steve Carell) threw a trident and killed a guy!

For another WTF sequence that escalates quickly, watch how Herr Starr eliminates the competition on Preacher…

Director David Cronenberg’s acclaimed crime film delivers one of the most visceral fight scenes in recent memory, with Viggo Mortensen’s tough guy gangster Nikolai defending himself against some deadly knife-wielding Chechen assassins in a bathhouse. Oh, and he does it while completely naked. Nikolai uses everything at his disposal, from brutal leg sweeps to bone-crunching arm breaks. He even tosses an old dude in a towel at one of the bad guys. Thanks for the assist, grandpa.

The Price is Wrong, Happy Gilmore

The Price Is Right’s Bob Barker might seem like a cuddly game show host and longtime proponent of the importance of spaying and neutering your pets. But when it comes to golf, the guy is a regular Rocky. Happy Gilmore finds that out the hard way when a heckler throws off his game while playing a pro-am with Barker. Annoyed by Barker’s comments on his performance, Happy takes a swing at the senior citizen. Big mistake, as Bob rains down on Happy with his geriatric fists of fury. While Happy gets in a nasty headbutt and some solid swings, Bob wins the day with a series of stomach blows and a swift kick when Happy is down. Now that’s what we call a “showcase showdown.”

While Peter going toe-to-toe with humanoid chicken Ernie has become a Family Guy tradition, the duo’s rumble from the Season 10 episode “Internal Affairs” is easily the most epic battle between man and poultry. As Peter and the Chicken exchange blows, the battle sprawls out to incorporate everything from a zero gravity space shuttle fight to a homage to the train scene from Back to the Future Part III. The fight is both a hilarious parody of over-the-top fisticuffs and a worthy addition to the WTF canon.

Brace yourself for outrageous moments and intense action when Preacher premieres its third season June 24th at 10/9c on AMC.