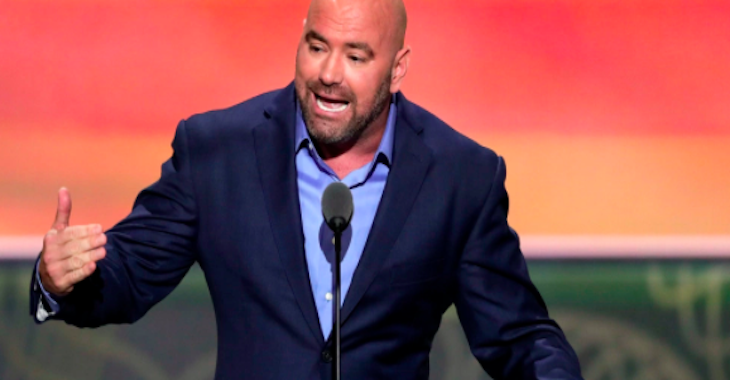 Floyd Mayweather and Conor McGregor‘s August 26 showdown is now less than a month and half away. To help build the hype for this monumental battle, the pair are participating in a four-stop, multi-city press tour. The first stop of this tour occurred last night, when the undefeated boxer and the mixed martial arts superstar met in the Staples Center in Los Angeles. UFC President Dana White was also in attendance, and in a post-fight conversation with the media, he dropped some interesting tidbits about the celebrities that might be attending the fight.

“We’re still getting the ticket situation together,” White said of the complicated task of distributing tickets. “We’re still working on that. But everybody and their mother is looking for a ticket.”

White was asked if New England Patriots quarterback Tom Brady would be in attendance:

“Tom Brady can do whatever he wants – he can get 10 tickets,” the UFC President joked. “We’ll give him every front row [ticket] we have.”

White was also asked whether US President Donald Trump, who is an old friend of his, had expressed any interest in attending.

“Funny you say that, but [Trump’s team] called me yesterday, and I don’t think they’re going to come, but they’ll be watching,” he said.

White then explained why Trump probably won’t be attending this blockbuster event, despite his apparent interest in it.

“He feels like he’ll ruin events, like he’ll ruin the event if he shows up,” White explained. “Secret service is going to have to go through the place. They’d have to shut down streets and create crazy traffic…”

While it’s unlikely that Donald Trump attends Conor McGregor and Floyd Mayweather’s anticipated battle, the crowd is likely to be peppered with dozens of other high profile celebrities.

Are you surprised by this story from Dana White?