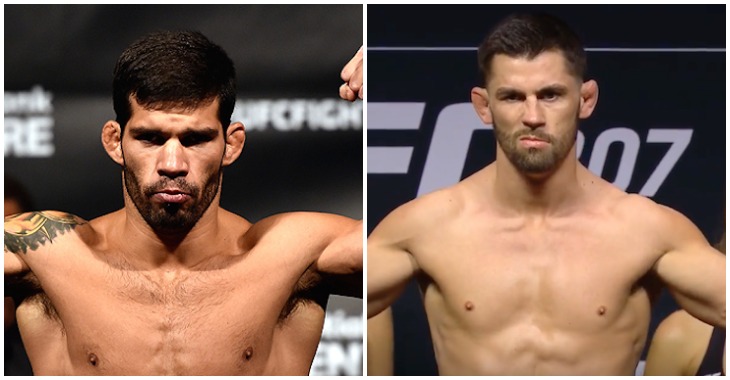 In the penultimate fight of the UFC on Fox 23 undercard, long-time bantamweight contender Raphael Assuncao scored a crucial win over Aljamain Sterling. In a post fight interview with UFC reporter Megan Olivi, the Brazilian talent was asked who he’d like to take on next. After a moment of consideration, he made a courteous callout of former champ Dominick Cruz, who surrendered the bantamweight title to Cody Garbrandt in December.

“I think Dominick Cruz would make a lot of sense right now,” Assuncao said. “He’s right there up in the top rankings. I don’t see any other guy. I need to get good consistency in my fight career.”

Shortly thereafter, however, Cruz shut down this callout from behind the analysts’ desk on Fox. Though he admitted it was a clever fight for the Brazilian to ask for, he assured it was one that probably wouldn’t happen.

“That’s a smart callout on his part”, Cruz said. “The reason is I’m ranked a bit higher than him. I’ve been more consistent in my career, even with my injuries. He’s not ready to see me, I’ll tell you that right now. That’s it.”

“It’s not a question of will I fight him,” he continued. “I’m here to fight the best in the world. The thing is, I’m ready to fight the guy that has the belt that thinks they’re the best. That’s who I’m in line for. That’s who I’m here to fight. The best, and that would be the next guy who thinks they’re the champion and I can take the belt from them.”

“That’s not Assuncao, number four or number five [in the division], who thinks he needs to get a string of wins together. He thinks I’m that guy? I’m not that guy, man. You need to fight someone lower on the totem pole if you want to get a string of wins together. If you want another loss on your record, you fight me, but I’m fighting for the title when I come back and that’s the end of it.”

Do you think Raphael Assuncao has earned a fight with the former champ Dominick Cruz? Sound off, PENN Nation!