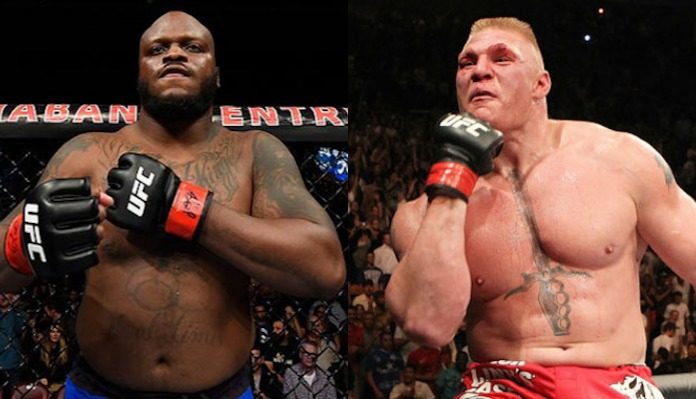 Contrary to previous rumors, former UFC heavyweight champion Brock Lesnar and long-time pro wrestling star Brock Lesnar has re-signed with WWE. Apparently, however, his new WWE contract could allow for at least one bout inside the UFC’s Octagon.

If Lesnar were to receive a heavyweight title super fight, it would cause quite a bit of resentment among the game’s premier heavyweights, given that Lesnar has not won a fight (without the aid of performance enhancing drugs) since 2010.

In the opinion of Derrick Lewis, who currently holds the number six spot in the UFC heavyweight rankings, however, a Brock Lesnar title shot is no big deal. The reason Lewis wouldn’t be bothered? Because he’s not interested in the title anyway. He’s interested in filling his bank account.

“I don’t really care about some damn title,” Lewis told MMAjunkie. “They talking about having Brock Lesnar coming in and fighting the winner out of ‘DC’ and Stipe. It doesn’t piss me off one bit because I’m not in this thing to fight for the belt anyway. I’m in it to fight for the money.”

Lewis’s next payday will occur at UFC 226, when he battles fellow knockout artist Francis Ngannou in a truly incredible bit of matchmaking. While he’d love to get a bonus in this fight, his primary focus this time around is on winning.

“I know how I can win the bonus checks,” Lewis said. “I try to make it a close fight and then I try to go ahead and turn it up towards the end. But for this fight against Francis, I know I’m going to have to come out hard and swinging and do whatever I need to do to win this fight.”

While Lewis isn’t especially focused on the heavyweight title, he says he’d gladly step in to replace Miocic or Cormier, if an injury were to occur — especially if it meant he got a cut of the card’s pay-per-view sales.

“I’ll be on weight,” Lewis said. “I should be under championship weight because it’s going to be summertime and I’m going to be training real hard. But I guess if that does happen, will I get the pay-per-view points?”

What do you think of Derrick Lewis’s take on Brock Lesnar and the heavyweight title situation?