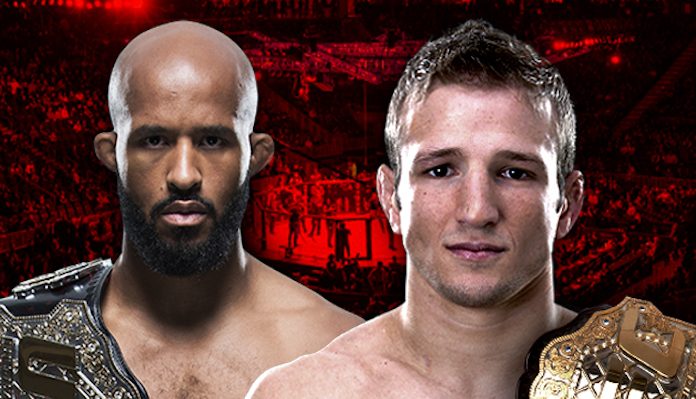 If we ever end up seeing UFC flyweight champion, Demetrious Johnson and UFC bantamweight champion, TJ Dillashaw squaring off inside the octagon, it apparently won’t be anytime too soon.

Rumors were afloat for a while that Johnson and Dillashaw could have been seeing each other across the cage as soon as July for the big international fight week UFC 226 card. Johnson even eventually confirmed that negotiations were going down.

However, according to the big boss man, Dana White per the LA Times, it won’t be happening.

“It’s not happening. It was never made. Plus, DJ is hurt and out for a while. We are working on [an alternate title defense for Dillashaw].”

What White was referring to with Johnson being hurt was the surgery he underwent recently to fix his shoulder.

Among all this, Johnson has stated that he is in fact interested in fighting Dillashaw next and said that’s what he wants. But another rumor has been floating around too that he would rematch Henry Cejudo in the Summertime. Something that is presumably also not happening now after seeing White’s comments.

The biggest takeaway here though is that we can now move on to what’s next for the 135-pound champion, TJ Dillashaw. He won the title from Cody Garbrandt at UFC 217 with a big second-round TKO after surviving some serious adversity late in the first round. Garbrandt, of course, would like an immediate rematch but we’ll just have to wait and see if that comes to fruition.

Since Jimmie Rivera is set to headline opposite Marlon Moraes at UFC Fight Night 131 in Utica, New York on June 1st, that really only leaves one other realistic option for Dillashaw next. That being another rematch, but with the man to last defeat him, former champion, Dominick Cruz.

Cruz was supposed to take on Rivera at UFC 219 in December but was forced out with a broken arm. He now is getting very close to fully recovered and may very well be now so perhaps this could be next and Cruz has also said he wants it.

Regardless, don’t be surprised if a rematch is next for Dillashaw.