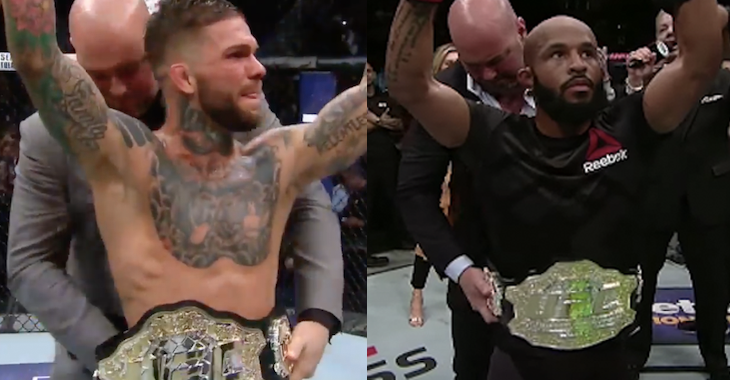 With Johnson getting his hand raised in his 10th title defense against Wilson Reis at UFC on FOX 24 over the weekend, “Mighty Mouse” tied Silva’s record for the most consecutive title defenses in UFC history. UFC bantamweight champion Cody Garbrandt said prior to the Johnson vs. Reis bout that he would like to make Johnson “earn” the record by dropping down to flyweight and challenging him for the 11th title defense.

However, speaking with Ariel Helwani on Monday’s episode of The MMA Hour, Johnson said that after talking with Cody, his next flyweight title defense will not be against the current bantamweight champion.

“He’s his own person,” Johnson said (transcribed by Dave Doyle for MMA Fighting). “Me and Cody talked off scene, everything’s fine, its just business. … It will not be my next fight. Don’t worry about it.”

With just one title defense away from marking his place in the history books, Johnson doesn’t feel any pressure of changing weight classes as he is solidifying his spot in the sport of mixed martial arts. “People say I need to go up and do this, do that,” Johnson said. “Why not be the greatest ever? UFC went out and signed a whole bunch of great new flyweight talent and I would not mind putting my name against their’s and giving them a loss.”

As for when Johnson will look to make history with his next title defense, the 30-year-old champion is in no rush to establish himself as the championship record holder.

“I’m going to let my body heal, relax, enjoy this history and just take my time,” Johnson said. “I won’t say any guy is on the radar until UFC sends me a contract, and then, that’s how it was for Wilson too. I knew Wilson was fighting, I didn’t know if we was going to win or not, I didn’t care if he was going to win or not, I had my training camp and I was ready to fight on April 15. If the UFC gave me a list of their events for the fall, I will look at it and go ‘hmm, I like this fight, I like the location, I’ll start my training camp 10 weeks out from there, and whoever is my opponent is my opponent.”

Who would you like to see Demetrious Johnson take on next for his chance to beat Anderson Silva’s record? Let’s hear it in the comment section!