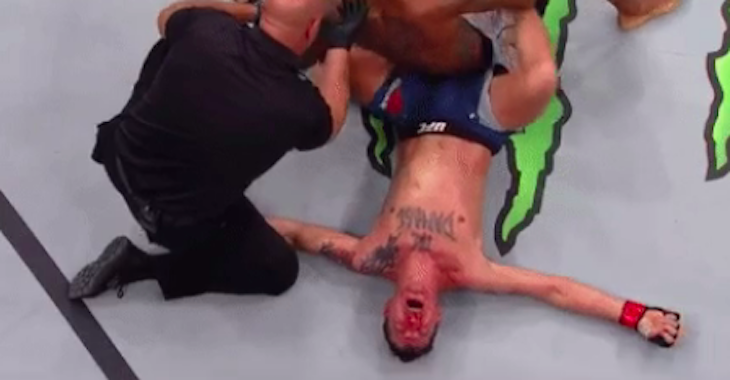 Originally, featherweights Michael Johnson and Darren Elkins were expected to battle on the UFC St. Louis undercard. When the card’s co-main event was scrapped at the last minute, however, Johnson and Elkins were bumped up to the main card.

Round one of this fight was all Michael Johnson’s, who pelted his foe with crackling combinations, wobbling him on more than one occasion. By the time the first frame ended, Elkins seemed to be oozing blood from every orifice north of the neck, and yet he managed to get off his stool for the second all the same.

In this second round, things took an abrupt turn, as Elkins quickly secured a takedown, and ultimately slipped into position to lock up a rear naked choke.

With this win, Darren Elkins moves onto a solid, six-fight streak, highlighted by triumphs over Mirsad Bektic, Dennis Bermudez and Michael Johnson. Now 24-5 overall, the Team Alpha Male fighter is now one of the division’s top fighters. Post fight, he called for a number-one-contender fight – something he might just deserve.

Johnson, meanwhile, comes up short in his featherweight debut. The former lightweight contender is now an unfortunate 1-5 in his last six, and 17-13 overall.

What did you think of Darren Elkins epic comeback win?