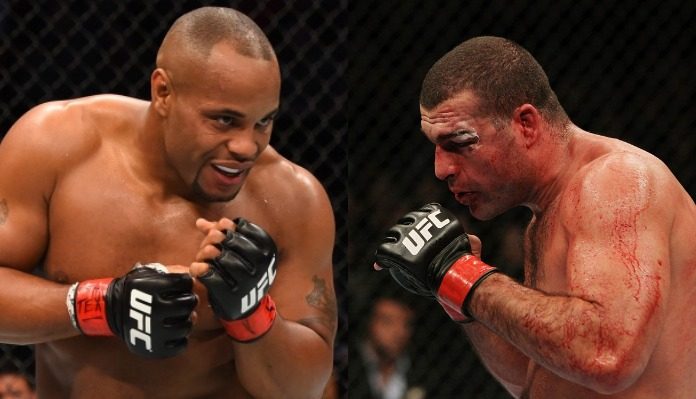 “We’re definitely gonna make that fight,” White said (transcribed by Jed Meshew for MMA Fighting). “Lesnar hit me up a couple days ago and said, ‘Sorry I went dark on you but I had some stuff I had to take care of. I’m gonna come to the fight this weekend.’ [I said] ‘Okay, see you Saturday.’

“He came here tonight, he was all fired up, if you couldn’t tell. Right when he got to my seat on the side, he was acting like a lunatic. He was fired up and excited for this fight. His gut told him Stipe [Miocic would win] because he felt that Cormier put too much weight on for this fight and he thought it was gonna affect him. It didn’t.”

“He’s free and clear to do this fight,” White continued. “He and Vince [MacMahon, WWE President] have a good relationship and he’s not gonna do anything to piss Vince off. I don’t know the specifics but he’s good.”

Before Lesnar can return to the cage to battle Cormier, however, he’ll have to serve the remainder of a lingering USADA suspension. This suspension is expected to keep Lesnar on the sidelines until at least January, and Daniel Cormier says he might attempt to defend his light heavyweight title in the meantime — ideally against PRIDE legend and former UFC champ Mauricio “Shogun” Rua, should he defeat Anthony Smith at UFC Hamburg.

Daniel Cormier tells @arielhelwani the Brock Lesnar will be the next heavyweight fight (even if it takes place during Superbowl weekend) but he could get in one at 205lbs in the meantime. Says if Shogun Rua wins he'd like fight him.

Does a fight between Daniel Cormier and Shogun interest you?