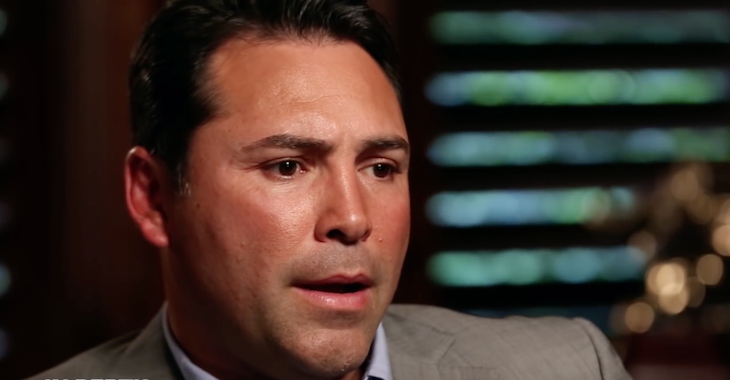 While the majority of the combat sports community was thrilled to hear that a boxing match between Conor McGregor and Floyd Mayweather had been finalized for August 26th, Oscar De La Hoya was not.

While De La Hoya wrote a lengthy letter in an attempt to prevent the fight from ever happening, he has now shifted gears and is expressing his frustration with UFC President Dana White for booking the McGregor-Mayweather fight just weeks before Golden Boy Promotions has their middleweight title fight between Canelo Alvarez and GGG at the same arena as McGregor vs. Mayweather.

He spoke on SportsCenter to express his frustration with White:

“It was disrespectful,” he said. “I would have thought that Dana White would have a little more respect with this boxing event taking place, because look, you just don’t do that. I mean, it’s like having the Super Bowl and then three weeks later the World Series takes place, the final game. It just doesn’t happen.”

“Well we have the whole year to stage these types of big events,” he said. “They could have maybe staged it in November or December but, look, it is what it is. We have a superfight here. We have a real fight, and that’s exactly what we’re focusing on.”

With that being said however, De La Hoya has previously stated that he believes the McGregor-Mayweather fight will not take pay-per view buys away from the Canelo Alvarez vs. GGG fight for the simple fact that he believes fans know that the fight between Alvarez & GGG is a ‘real fight’ as opposed to the McGregor-Mayweather fight, which many, including Canelo Alvarez have called a ‘sideshow’.

Fortunately for fight fans, the two scrap will take place several weeks apart, and they will not have to choose between which event to watch.