Khabib Nurmagomedov urges Dana White to let him coach The Ultimate Fighter with Tony Ferguson: “Call me back!”

‘The Eagle’ and ‘El Cucuy’ have one of the greatest rivalries in UFC history. Despite that, the two never fought thanks to multiple bookings falling through over the years. Their fight cancelations happening due to everything from botched weight cuts to a pandemic.

Nurmagomedov retired in October 2020 following a win over Justin Gaethje. With that, all hope of a fight between Ferguson was now completely gone. However, that doesn’t mean they like one another. In retirement, Nurmagomedov has traded words with Ferguson on many occasions.

Earlier this week, Tony Ferguson suggested the two compete against each other in a unique way. The former UFC interim lightweight champion stated the two men should coach opposite teams on The Ultimate Fighter. The Russian later supported the idea on Twitter as well.

Khabib Nurmagomedov has now confirmed in an interview with ESPN that he’s completely serious about the offer. ‘The Eagle’ noted that he would like to help the UFC in retirement, and compete against Ferguson. Nurmagomedov also told Dana White to call him about setting the season up. 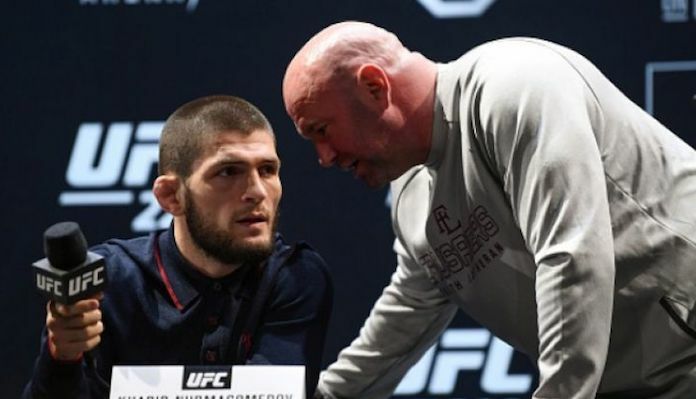 “I like this idea. We can do some stuff. Because right now, it’s like, not too many big stars in UFC right now. Myself, I’m finished. Jon Jones is not there. Henry Cejudo is not there. Daniel Cormier is not there. Of course, I don’t like this guy, but he has a big name… There are only a few people, you know? If me and Tony are going to be The Ultimate Fighter coaches, I think we can create some good content, if they’re interested.”

Khabib Nurmagomedov continued, “I don’t want to give him pressure, but Dana, we have to finish two business: Islam Makhachev and The Ultimate Fighter. Please call me back, brother. Because if you don’t call me back, I’m going to be in Vegas in June. Then you’ll have to send me a message with your location. Be careful, Dana. We have to finish our business. Call me back.”

What do you think about Khabib Nurmagomedov and Tony Ferguson coaching The Ultimate Fighter?