Ferguson and Gaethje squared off for the promotions interim lightweight title in tonight’s pay-per-view event headliner in Jacksonville, Florida.

The highly anticipated scrap lived up to the billing as Justin Gaethje and Tony Ferguson proceeded to go to war for nearly twenty-five straight minutes.

Throughout the course of the first four rounds, ‘The Highlight’ was seemingly able to get the better of ‘El Cucuy’, battering Ferguson with punches and leg kicks.

In the fifth and final round, Justin Gaethje would once again unleash a hard combination on Tony Ferguson. This time the referee had seen enough and quickly stepped in to call a stop to the action, thus awarding Gaethje the TKO victory. 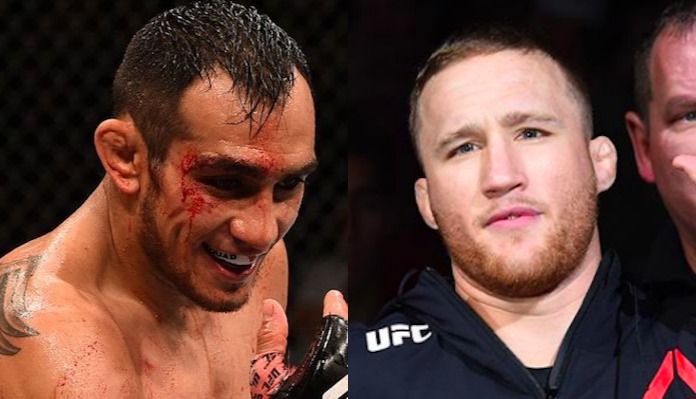 Shortly following the conclusion of tonight’s event, UFC President Dana White caught up with Helen Yee where he discussed the UFC 249 headliner.

After revealing that Tony Ferguson had been taken to hospital, White had the following to say:

“I thought Tony Ferguson looked off tonight. He looked slow.”

Dana White would later add that he’s not sure if Tony Ferguson is human, but believes he is an incredible human being. He also said that he thinks this was the end for a potential Ferguson vs. Khabib matchup.

Following his fifth-round TKO victory over ‘El Cucuy’ at UFC 249, Justin Gaethje will now be the next man to square off with undefeated lightweight champion Khabib Nurmagomedov.

It is a fascinating stylistic matchup, one which could ultimately prove to be the toughest test of the Russian’s career.

Dana White did not hint at what would come next for Tony Ferguson. But the former UFC interim lightweight champion will likely need a long layoff following tonight’s war with ‘The Highlight’.

Do you agree with UFC President Dana White that Tony Ferguson looked off tonight at UFC 249? Share your thoughts in the comments section PENN Nation!

This article first appeared on BJPENN.com May 10, 2020