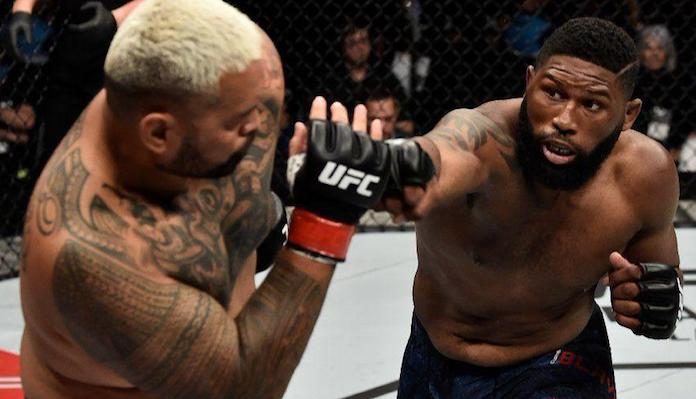 News that former UFC heavyweight champion Brock Lesnar will get the next shot at new heavyweight champ Daniel Cormier generated backlash from a big portion of the MMA community. A giant segment of fans were immediately furious that Lesnar had been granted the opportunity, despite the fact that he hasn’t legitimately won a fight since 2010. Of all the people unhappy about Lesnar’s title shot, however, it’s arguable that none are quite as ticked as Curtis Blaydes. Blaydes, after all, could well have gotten the next heavyweight title shot had Lesnar not cut the line.

Since news of Lesnar’s return was announced, Blaydes has shared his frustration on social media on several occasions.

On Monday night, the surging heavyweight contender did so again, explaining the key difference between himself in Lesnar.

Two fights ago, Blaydes defeated striking legend Mark Hunt via dominant unanimous decision. Hunt was also the last man Lesnar fought, and though Lesnar initially walked away with a unanimous decision win of his own, that win was overturned when Lesnar tested positive for the banned estrogen-blocked clomiphene.

That, Blaydes implied, is the key difference between himself and Lesnar. Lesnar needed help to beat Hunt. He didn’t.

Blaydes also took a shot at Lesnar on Instagram, sharing a video of Lesnar being kneed in the body by Alistair Overeem — who he just defeated himself.

“How I felt when UFC gave Brock the title shot,” Blaydes said in the caption for this video.

Needless to say, Curtis Blaydes is not happy about having his spot in line taken. Do you understand his frustration? Join the debate in the comments section.