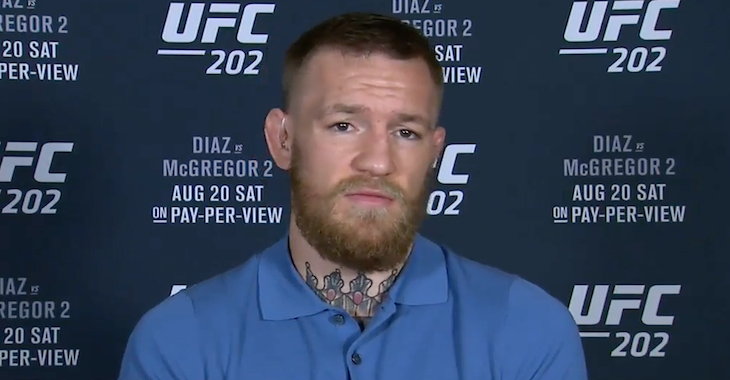 Earlier this year, UFC featherweight champion Conor McGregor sparked a massive feud between himself and nearly the entire WWE roster when he stated that all WWE stars are “p**sys” after former UFC heavyweight champion Brock Lesnar failed a pair of drug tests relating to his UFC 200 bout with Mark Hunt.

Several members of the WWE roster went on to release a compilation video firing back at McGregor, which then prompted the featherweight champ to fie back with a video of his own, in which he called the WWE roster “dweebs”.

On the heels of former WWE champion CM Punk making his UFC debut this past weekend at UFC 203, WWE star Randy Orton took the opportunity to troll the featherweight champ during a social media Q&A.

Unless it was the Irish guy little person Connor Mcdonald

McGregor is fresh off his UFC 202 majority decision win over Nate Diaz. While there has been no official word yet as to when McGregor will return to the Octagon, reports have emerged that the UFC is targeting a lightweight title fight between McGregor and Eddie Alvarez for their inaugural show at the Madison Square Garden, UFC 205.

Despite that, UFC President Dana White has remained adamant that McGregor must defend his featherweight championship next, or be stripped of the belt.

In the mean time, #3 ranked featherweight Max Holloway has been looking to secure a fight with interim champion Jose Aldo, who has been very open about wanting to fight Anthony Pettis, who successfully made his featherweight debut last month.