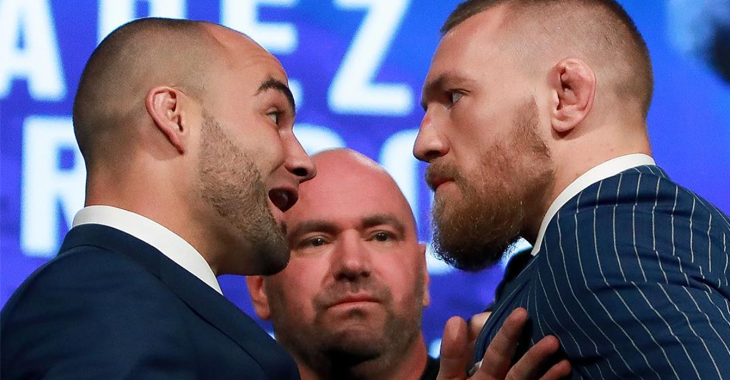 UFC featherweight champion Conor McGregor will look to make history at UFC 205 next month when he takes on lightweight champ Eddie Alvarez for the UFC’s first-ever event in New York.

“The Notorious”, while primarily a striker, has been brushing up on his wrestling ahead of his showdown with Alvarez, who has a formidable wrestling game and will certainly look to put the brash Irishman on his back during their 155 pound title fight.

See for yourself how McGregor’s training is going as he works on his wrestling in preparation for the versatile lightweight champ!

McGregor hasn’t defended his 145 pound belt since winning it from longtime former featherweight kingpin Jose Aldo, who was knocked out in a mere 13 seconds in their UFC 194 title fight.

Since winning the featherweight strap, “The Notorious” moonlighted twice at welterweight against Nate Diaz, losing the first fight by second round submission at UFC 196 and avenging his first UFC loss at UFC 202, where he defeated Diaz by judge’s decision.

Meanwhile, Alvarez will be defending his belt for the first time since winning it from Rafael dos Anjos, who he defeated by TKO in July. In the most recent edition of “The Mac Life“, the featherweight champion is seen working on his ground game and wrestling in preparation for Alvarez, who has a stifling top game and is known to mix it up between striking and grappling. McGregor has been honing his wrestling skills with longtime coach Sergey Pikulskiy.

In fact, McGregor’s lone UFC loss occurred on the mat of the octagon, where he was tapped out by Diaz with a rear-naked choke after an ill-advised takedown following a solid punch by the Stockton slugger. “The Notorious” appeared to have improved upon  his ground game, as he was able to avoid Diaz’s lethal submission skills and walk away with the victory after a hard-fought battle between the two.

How do you see McGregor’s fight with Alvarez going down? Will Conor be able to stop Alvarez’s takedowns and keep the fight standing? Or will Eddie’s wrestling be too much for the featherweight champ? Sound off, PENN Nation!