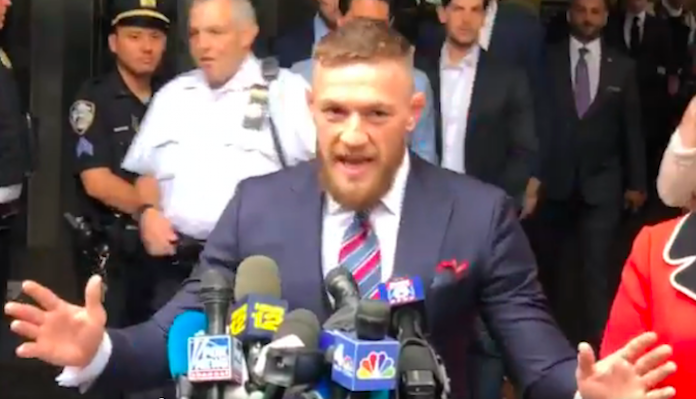 Conor McGregor’s Thursday court appearance, which stemmed from his infamous April rampage in Brooklyn, couldn’t have gone much better for him. The Irish MMA star walked out of court with no criminal charges. The only punishments he received were five days of community service, restitution fees for the bus he damaged, and a mandatory anger management evaluation.

Statement from Conor McGregor after his guilty plea. pic.twitter.com/WqtJ4gVYmc

“I just want to say I’m thankful to the DA and the judge for allowing me to move forward,” McGregor told the media as he walked out of court. “I want to say to my friends, my family, my fans, thank you for the support.”

“I want to say thank you to the court,” Attar said. “Now that this has passed us, we can focus on some things that have been our goals for some time. Conor’s been training, he’s in shape, he’s ready to go. So now it’s just about getting back to business…”

Finally, Bruce Maffeo, one of McGregor’s attorneys, also issued a quick statement on the days proceedings.

Here’s what Bruce Maffeo, one of McGregor’s attorneys, had to say about today’s appearance. pic.twitter.com/omU2ds1CFG

“This is the same outcome that would have occured if he’d been a non-celebrity,” Maffeo stated. “The DA’s office has thought through this very carefully. We appreciate the staff, we appreciate the district attorney’s office treating this as it would any other case, and McGregor’s looking forward to completing his community service and moving on with his career.

“Community service will be determined by the court,” Maffeo added. “It will be five days for Conor and three days for his co-defendant. It will be done under the supervision of the district attorney’s office. They’ll make the determination later [as to] where and when that’s going to occur. Importantly for Conor, and importantly for your readers or viewers, he pleaded guilty not to a crime, so this will have no impact on his immigration status and no impact on his ability to continue boxing.”

What do you think the future holds for Conor McGregor with this legal situation squared away?