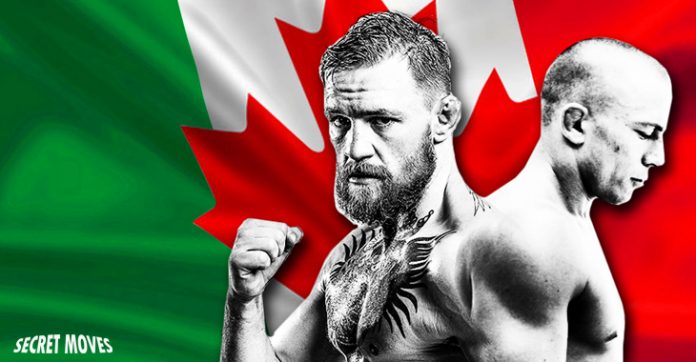 As Khabib Nurmagomedov and Tony Ferguson prepare to wage their war supposedly with Conor McGregor‘s lightweight title on the line, The Champ Champ™ is enjoying fatherhood and a life that millions upon millions of dollars have afforded him. Meanwhile, another two-division champion is recovering from endangering his health to capture the UFC middleweight title. In the combat sports universe, everyone always wants to know what’s next. For Georges St-Pierre, everything seems up in the air, but not to Chael Sonnen. His prediction is clear and there is simply no bigger fight for either man: Conor McGregor vs. Georges St-Pierre.

“I do believe [Georges St-Pierre] will be back and it will be against Conor [McGregor] in what will be the biggest fight in MMA history. I know that Georges will do it. He’s made that clear. And I also know, contrary to what some fans will say about, ‘Well, what weight class? You can only ask Conor to go up so much.’ Georges will go down. And now that it has come out that Conor talked to Dana [White] and wanted to do a 165-pound fight, Georges would go down to 165.”

GSP will never kiss the ring of Conor McGregor, but that doesn’t mean he doesn’t want the fight… pic.twitter.com/NuBTRNrEdm

“I’ll speak for him, I’ll tell you, he for sure will. I’m not speaking for him, he shared that with me, but I will pass that on to you. He would go to 165 if it means Conor. Conor doesn’t have the belt and Georges wants to come back and Georges only wants to come back for Conor. And they both want to do this legacy and all this other stuff – a check guys, that’s what you’re getting on this. Forget about how we think about you in the future, let’s talk about tonight. That’s the fight.” — Chael Sonnen speaking on Beyond the Fight.

Conor McGregor may have brought up the idea of a 165-pound ‘super lightweight’ title for more than just as a way to make stepping in to fight Frankie Edgar at UFC 222 worth his while. If Georges St-Pierre comes back, he’s made it clear he can’t fight at middleweight and that he’s only fighting for something that makes his legacy mean more. Sonnen argues that is preposterous, but becoming the first ever three-division champion in gigantic fight with McGregor has got ‘legacy’ written all over it… and it comes with an even bigger check.